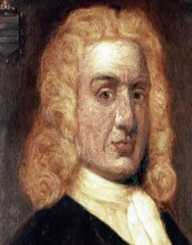 William Kidd was a British pirate of Scottish origin who was notorious for plundering ships in the Caribbean and the Indian Ocean. His public trial and subsequent open hanging led to the rise of many legendary stories about his life.

William Kidd was born around the year 1645 in Dundee Scotland. Some other records report his birthplace at Greenock in Scotland. His family background is obscure. The only mention is that his father disappeared or died in the high seas off the coast of Britain.

As a young lad in Dundee, the port must have enticed him to try seafaring from an early age. But the earliest record of his sailing was in the late 1680s.

In 1689 William Kidd was a seaman in the Caribbean Sea. For unknown reasons the crew staged a mutiny against their captain and Kidd was elected the new captain of the ship.

He was commissioned by the colonial governor of St Kitts and Nevis to protect the territory from the French. Kidd obliged with the offer. To maintain the pact, Governor Codrington allowed the crew to plunder the French ships as their salary.

To prove his acceptance and allegiance, Kidd renamed his ship Blessed William, after King William of England. The defense fleet had many raids on French ships until part of his crew revolted against him.

They joined forces with pirate Captain Culliford and sailed away with his ship while Kidd was ashore. Kidd then sailed to New York which was a British colony in North America.

William Kidd married and started a merchant business in New York. Since the scourge of piracy was stifling the trading fortunes of the area, the governor of New York enlisted Kidd to protect its waters.

The order came in 1695. With a considerable amount of funding, Kidd managed to build a formidable ship. He called it Adventure Gallery. It was a massive ship with a secure defense mechanism. To many, this ship was the ultimate solution to the buccaneering problem. He patrolled the waters off the New York arrears until 1697.

William Kidd was then commissioned to protect British vessels in the Indian Ocean. He sailed his ship through the Mediterranean and Red seas to the Comoros Islands. His official mandate from his financiers in Britain was to protect any British vessel.

In return, he could plunder any foreign-owned ship that he encountered. With few foreign ships to attack, Kidd’s crew became restless. They pressed their captain to attack British owned ships to increase their fortunes. Fearing a mutiny, Kidd obliged.

William Kidd started intercepting and looting British owned ships along the Indian Ocean waters. The news of his new activities reached his financiers in London and New York. Kidd was declared a pirate and his death was a foregone conclusion.

He was to be captured and killed. Now a wanted pirate in the high seas, Kidd intercepted an Armenian owned merchant ship off the coast of India. When onboard, he discovered that the captain was British. Nevertheless, his crew seized the ship. He later raided another ship and gained some substantial loot. The British East Africa Company claimed that they had hired these vessels.

On the other hand, William Kidd claimed that he found written commissions on board Quetta Merchant and Maiden that showed the two ships were sailing under French authorization. He sailed to Madagascar to restock his supplies. With the Adventure Gallery too old to sail, he sold it and took another ship. Kidd decided to return to New York to plead his innocence.

William Kidd reached the North American colony of New York in July 1699. The governor arrested him. All his financiers abandoned him. He was confined in jail for almost one year in New York. Kidd was then transferred to London to stand trial. In February 1900, Kidd was handed over to the authorities in London. His trial was organized in May of 1900.

His spirited defense against the two piracy charges and murder of one of his sailors proved futile. He was sentenced to hang in public. On the 23rd of May 1900, Kidd was publicly hung. His body was draped in an iron case and left to hang on the Thames for almost two years. This was a deterrent warning to any would-be pirate.

William Kidd's betrayal and death were later proved when the defense documents proving his innocence were discovered in London. Many treasure hunters have spent their lifetime trying to locate the treasures from the two ships Quetta Merchant and Maiden.