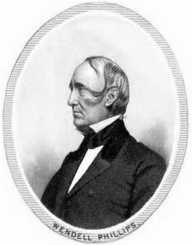 Wendell Walley Philips was born in the city of Boston, Massachusetts, on November 29, 1811. His father, John, was a wealthy attorney and the first mayor of Boston. His mother’s name was Sarah Walley. He had two sisters, named Sarah and Miriam. He had five brothers, named John, Thomas, Samuel, George, and Grenville.

Wendell Walley Philips passed the Massachusetts state bar in 1834. He then opened up his practice in Boston. In 1836, after only two years of work, he closed the practice to focus on political activism.

Wendell Walley Philips became inspired by abolitionist journalist William Lloyd Garrison. He joined the American Anti-Slavery Society and the Boston Vigilance Committee. He often gave speeches and became known as the ‘abolition’s Golden Trumpet.’ In 1840, he attended the World Anti-Slavery Convention at the Exeter Hall in London. In 1854, he was arrested for trying to rescue the fugitive slave Anthony Burns.

Philips was soon after released from prison. He gave a big speech at the New Bedford Lyceum when the Civil War began. He believed that black people should have the right to vote and to own land.

Apart from abolitionism, Philips also focused on women’s rights. He believed women should have the right to vote and to own property. He was a member of the National Woman’s Rights Central Committee and an advisor to activist Lucy Stone.

Wendell Walley Philips also focused on the legal rights of Native Americans. He believed they should be granted citizenship. He advocated for the return of the land to the Lakota tribe. He helped found the Massachusetts Indian Commission.

During his later years, Wendell Walley Philips suffered from heart disease. He passed away in his Boston home on February 2, 1884. He was 72 years old. On February 6, his funeral was held at the Hollis Street Church. His body was then buried at the Granary Burying Ground. On February 12, the Bethel African Methodist Episcopal Church in New York City held a memorial service for him.