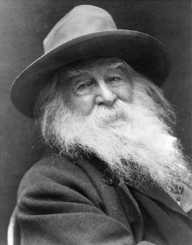 Walt Whitman is regarded universally as the ‘father of free’ verses. He is among the foremost poets in America whose memory lingers in the mind of many people passionate about poetry. His major works are ‘Leaves of Grass’ and ‘Drum-Taps’.

Walt’s persuasive quality and skills have positively impacted on the lives of many aspiring poets. He also composed a poem “O Captain, My captain” when the sixteenth US president, Abraham Lincoln, died.

Walt Whitman was born into a middle-class family on May 31, 1819, in the Long Island in New York. He lived for a period of seventy-two years until he met his death on March 26, 1892. He succeeded the name of his father who was a carpenter and a farmer. Due to economic upheavals that faced their family, they relocated to Brooklyn in search of money.

Walt attended the recently instituted Brooklyn school for six years, being that his family could not raise enough money to earn him a chance in the paramount private schools at that a time. The corporal castigations pissed him off and he later criticized it in his journals. At 11 years, he left school to look for work so that he could sustain his family. He worked as a law office junior and a newspaper apprentice. His parents belonged to no religious group.

During his boyhood, Walt Whitman liked visiting his grandparents who lived in the Long Island and adoring the shores, an affection that was expressed in his poem ‘Out of the Cradle Endlessly’. He also developed a liking towards ferries and the people who operated them. His eagerness to be a poet sky-rocketed in that landscape.

Walt loved and looked up to his brother Thomas Jefferson, who was born fourteen years after his birth. Despite not getting a good education as his great poet colleagues, he was motivated to create something out of himself. His brilliance moved him to go an extra mile. He settled on a lot of reading, visiting libraries and attending lectures. He interacted with pronounced writers such as Sir Walter Scott, James Fennimore Cooper, and many other romantic writers. Walt also developed an affection for Shakespeare’s plays.

In addition, Walt Whitman informally explored history, literature, music, geography and archaeology out of the America’s public resources available at the time. This aided him to amass the knowledge and skills he needed in writing and reading.

To his great surprise, the path Walt Whitman struggled to maintain throughout his early life and in various life circumstances soon led to his career. He got engaged in a newspaper company which opened the opportunity to learn about the printing work.

When he was 12 years, Walt developed a perpetual interest in the newspaper and was so much inspired when his own words too could be published and read by the public. In 1834, he took on his first editorial in the classy ‘New York Mirror’. His initial years greatly stimulated his writings. His love for ferries geared him to write his first poem “Crossing Brooklyn Ferry” and also the poem, “Out of the Cradle Endlessly” which he reconnoitered his boyhood memories in the island.

At sixteen years old, Walt Whitman became a journeyman copier and a compositor in New York. He also forced himself to teach, a career that he lowly regarded yet his circumstances could not allow him to escape. In 1841, he terminated this job, after teaching for some period, and tried his first newspaper ‘The Long Islander”.

In the early 1980s, Walt commenced on fictional writing. He penned down articles about the Democratic Party’s compromising methods to slavery and came up with poems to address the same. In 1885, Walter Whitman Sr his father died due to deteriorating health. Whitman took up his father’s role in catering for the family. Despite the unfortunate incident and the odds presented by his fellow writers, Whitman was able to continue writing and remained focused on his new book. His remarkable efforts helped him to remain steadfast at his work.

Walt Whitman correspondingly concentrated on organizing his works in different clusters and during the 1860s period he reprinted ‘Leaves of Grass.’ He proceeded with his writings and circulated several articles including ‘Memoranda During the War’ in 1870 and overseeing various accounts of his life in the 1880s.In 1891, he printed a thirty-one book ‘Goodbye My Fancy’ even though his poetic vigor had worn out. In addition, he also wrote ‘Osceola’, ‘Twilight Song’ and ‘Sunset Breeze.’

Walt Whitman engraved an anthology of poems entitled “Leaves of Grass”. In his poems, he explored the American’s history including the involvements during the civil war. He also published Journals and various non-fiction works such as ‘Democratic Vistas’. In addition, he designed the free verse in poetry. He came to be known as a skilled poet, an essayist, a commentator and also a craftsman; he invented free verse.

Walt Whitman mostly lived on his own and not once did he marry. It is said that he must have likely had homosexual or bisexual features.

Walt Whitman penned letters that aimed at mobilizing resources to purchase gifts for injured soldiers. He visited hospitals and helped wherever possible.

Walt Whitman was struck by a stroke in 1873 and later was diagnosed with buckled lungs. His heart too was “surrounded by numerous small abscesses and about a two and a half quarts of water.” This led to his death on March 26, 1892.