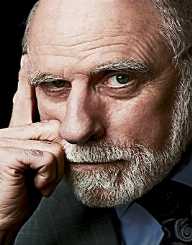 Vinton Gray Cerf also was known as Vint Cerf was born on June 23rd, in 1943. Being regarded as an internet pioneer, Cerf has over the years earned the recognition of being “the fathers of the internet.” This is an identity that he proudly shares with Bob Kahn, who is also a TCP/IP inventor. Cerf’s contribution in the field of IT engineering have not only gained him high acclaim, but he has been bestowed with numerous awards as a result. Some of these awards include the Turing Award, the National Medal of Technology, the Marconi Prize, the Presidential Medal of Freedom and several others.

Vint Cerf was born on June 23rd, 1943. His place of birth was in New Haven, Connecticut. He was born to Vinton Thurston Cerf and Muriel. His father worked as an aerospace executive while his mother was a housewife. For his early education, Cerf went to school at Van Nuys High School situated in California. Notable individuals that he schooled at the same institution were the likes of Steve Crocker and Jon Postel.

Later on, Cerf went for his Bachelor of Science degree at Stanford University in California. Here, he had majored in Mathematics. He graduated in 1965. Sooner or later, he got his first job at IBM. He worked with the company for 2 years. He was the systems engineer for the organization where he showed support for QUIKTRAN.

It did not take time before Cerf went back to further his studies at the University of California, Los Angeles. In 1970, he successfully graduated with a master’s degree. He did not stop here; he went ahead to pursue his Ph.D. degree after which he graduated in 1972. It was around this time that Cerf crossed paths and became friends with Robert E. Kahn – also known as Bob Kahn. At this time, Kahn was working on the ARPANET network.

With time, Cerf took the task of an assistant professor at his former university, Stanford. He had already acquired his doctorate when he took up the job. This gave him an ideal platform to get busy with packet network research. This is something that he engaged with his friend and scientist Bob Kahn. Together, they came up with their new invention called DoD TCP/IP protocol suite.

Shortly, Cerf went on to work for a government agency called Defense Advanced Research Projects Agency – DARPA. This is a post he took in 1976 and worked with the body for about six years before leaving in 1982.
Thanks to the reputation that he had gained previously that he was quickly appointed to the post of MCI Digital Information Service’s vice president in 1982. He worked under the same post for the next four years until 1986. While working in MCI, he was credited for his engineering contribution that led to the first ever commercial email service that was connected to the internet.

During the same year, Cerf again paired with Kahn. At this time, Kahn was working at the Corporation for National Research Initiatives. Soon, he was made its vice president. This strong partnership led to the creation of Internet Security. This is a body that they founded alongside other engineers in the same institution. The main goal of the organization was to spread education closely related to the internet and ensure that the internet was accessible by any individual.

Soon, in 1994, Cerf was again called to offer his services at MCI under the post of Senior Vice President of Technology Strategy. His second term in the same company led to several technical advancements where he was credited.
Three years later, he joined hands with Gallaudet University’s Board of Trustees. This university was tailored to offer education to those that had hearing impairments. Later, in 1999, he went on to join Internet Corporation for Assigned Names and Numbers – ICANN. He remained an active member until 2007.

At some point, Vint Cerf was appointed by Google as its Vice President. This was in October 2005. He was also given the duty to serve as the company’s Chief Internet Evangelist. While working here, Cerf made comments on how technology would influence coming generations. This also brought him high acclaim.

In 2010, Cerf interests in getting the internet to be widely available made him play a huge role in Broadband Commission for Digital Development where he has continuously served as the commissioner.

Throughout his successful career, Vint Cerf has obtained numerous awards. Some of the notable ones include the National Medal of Technology. Former US President Bill Clinton gave him this award. He shared the award with his partner Bob Kahn. Another award that they shared was one that was offered in 2004, i.e., the A.M.Turing Award. Together, they were also awarded the Presidential Medal of Freedom by former US President George W. Bush.

Vint Cerf wedded Sigrid in 1966. The pair is proud parents of David and Bennett. The entire family lives in Virginia.