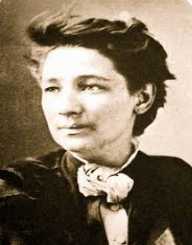 Victoria Woodhull was born on September 23, 1838, in Homer, Ohio, United States. She was an American activist, author, and politician who became the first woman to run for the presidency in the United States. She was on the forefront for the women’s suffrage movement and attempted to take up the presidential seat in 1872. She was also a member of the spiritualist movement in the 1870s and the founder of the United States newspaper known as Woodhull & Claflin’s Weekly. She died on June 9, 1927.

Victoria Woodhull was born Victoria California Claflin to Reuben Buckman Claflin and Roxana Hummel Claflin. She was born on September 23, 1838, in Homer, Ohio, the United States in a family of ten children. She grew up as a believer in spiritualism in which she drew much of her future motivations.

She had only acquired three good years of formal education by the age of eleven and was very intelligent. She dropped from school when her family was forced to leave Ohio due to her father’s careless and fraudulent motive to secure insurance compensation over fire claims. Her father had set their rotting gristmill on fire intentionally.

In 1868, Victoria Woodhull moved to New York alongside her sister Tennessee where she met Cornelius Vanderbilt who helped them start up a business. Together with her sister, they became the first women to work as stockbrokers in the United States. In 1870, they founded their own brokerage company located on Wall Street known as Woodhull, Claflin & Company with the assistance of Vanderbilt.

Her firm became a success hitting the records of fortune on the New York Stock Exchange and also being branded as ‘the Queens of Finance’ by the New York Herald newspaper.

On May 14, 1870, Victoria Woodhull founded her newspaper known as Woodhull & Claflin weekly alongside her sister. She channeled the money she got from her brokerage firm as the startup income for the newspaper. The newspaper intended to promote her presidential aspirations for the United States.

The initial subjects that were captured in the newspaper focused on feminism, but later other topics on sex education, women suffrage, free love, vegetarianism, and spiritualism were included. The newspaper also captured and published Karl Marx’s first English translation titled ‘The Communist Manifesto.’

Victoria Woodhull also became an ardent supporter of women’s rights and joined associations like the First International providing her support by publishing their articles in her newspaper. However, it was annulled later in 1871 when the Germans sent away most of the members of the First International organization mainly who spoke English from the United States.

Victoria Woodhull was first married to Canning Woodhull on November 20, 1853, at the age of fourteen. Together with Canning, she had two children namely Zulu and Byron. The couple divorced as she could not keep up with her husband’s alcoholic behavior and extramarital affairs. She was married to Colonel James Harvey Blood in 1866 and later divorced him in 1876. She was later married to banker John Biddulph Martin on October 31, 1883.

Her third husband Martin died in 1901, and she stopped publishing and resorted to retirement. She moved to Bredon’s Norton which became her living place where she also founded a village school known as Bredon’s Norton School together with her sister Tennessee and Zula. She died at the age of eighty eight on June 9, 1927, in Bredon's Norton, Worcestershire, England.