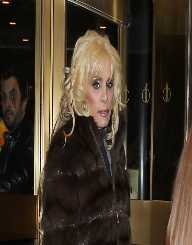 American actress, author and reality television personality Victoria Gotti was born to her parents, father John Gotti, a convicted mafia don popularly known as ‘The Dapper Don’ and mother Victoria DiGiorgio, on November 27, 1962, in Brooklyn, New York, United States of America. Her mother belonged to a Russian-Jewish ancestry from her maternal side. Her father was infamous for leading the Gambino crime family and was convicted for extortion and five counts of murder. Gotti grew up in an ordinary two-storied house in Howard Beach, New York along with her four siblings including brothers John A. Gotti, Frank Gotti and sister Angel Gotti. During her childhood, she was very shy and silent. For many years, her parents were of the view that Victoria perhaps is an autistic child due to her extraordinary quiet nature.

According to the version of Victoria Gotti , they were a humble middle-class family with traditional family values. Her mother was entrusted with the task of making her children’s apparels and was also responsible for her daughter’s haircut. Her father was a strict enforcer of family rules and also tried to assess the suitability of Victoria’s male companions. While growing up, Gotti rarely saw her father’s presence in the family, who often had to spend his days in imprisonment during that period. Her mother used to console them by telling that their father was out of station for some business involving plumbing supplies to build a prison facility. She had a difficult time during her high school days as she was diagnosed with a mitral valve prolapse, making her heart race and causing dizziness and palpitations. In spite of all her physical problems, Gotti was a voracious reader and a dedicated straight-A student. Due to her excellent academic results, she was allowed to enter St. Johns University in 1977 at the age of 15 bypassing two grades in high school.

Family disasters seemed to be a part and parcel of Victoria’s life during her young life. When she was 18, her 12-year-old brother Frank was killed after being hit by a car while negotiating traffic on board a motorbike. She was totally devastated by the untimely death of her beloved brother whom she had nicknamed as her 'Little Doll’. The driver of the car, John Favara, responsible for fatally hitting Frank could not escape the wrath of a revengeful mother. Victoria Gotti ’s mother thrashed Favara with a baseball bat so severely that he had to be hospitalized. Favara’s misfortune continued and he was reportedly kidnapped four months after the incident of his hospitalization and was never again seen in public. Victoria Gotti, however, was in complete denial about her family’s involvement in the incident of Favara’s abduction and feigned total ignorance about his disappearance.

Victoria Gotti ’s cup of woes got fully filled when in 1992, her father was declared guilty of extortion and five counts of homicide. He was imprisoned for life without any provision of parole. She was unable to come to terms with the harsh judgment and favored her father with unconditional dedication.

Victoria Gotti decided to join a law school after obtaining her college degree. However, she soon realized that she is too quiet and shy to become a formidable lawyer. She dropped her plan to study law upon realizing her disadvantage.

She then started her career as a columnist at the New York Post and a reporter for WNYW. WNYW is a flagship station of Fox Television catering to the New York City populace. She authored her first book ‘Women and Mitral Valve Prolapse’ in 1995. The book dealt with her own heart problem and her battle to cope with it. Her narration of the context of the book in relatable terms received critical accolades from patients and doctors alike. The success of her first book led her to further pursue a career in writing and in 1997; she came up with her first fiction work, her mystery novel ‘The Senator's Daughter’. The book received rave reviews.

In 1999, she published her second work of fiction ‘I'll Be Watching You’ again with good reviews in her favor. She continued to write in the same vein and authored many more books including the likes of ‘Hot Italian Dish’ (2006), ‘Superstar’ (2000), ‘This Family of Mine: What It Was Like Growing Up Gotti’ (2009).

Victoria Gotti took a plunge in the world of reality television in August 2004, when she along with her three teenage sons became the part of a reality TV show on the A&E Network titled ‘Growing Up Victoria Gotti ’, narrating their own story. The show became very popular and she and her three sons were nicknamed ‘the Hottie Gottis’ by the adoring audiences. The show concluded in December 2005. She again returned to reality television in 2012, when she became a part of the 18 contestants on the American reality television show ‘Celebrity Apprentice’. The show began in February 2012 and Victoria Gotti was eliminated in only the second week of the competition after competing with the likes of singer Clay Aiken, actor George Takei and compatriot reality star Teresa Giudice.

Victoria Gotti  married her high school boyfriend Carmine Agnello, a scrap metal dealer, in 1984 shortly after leaving school. They together have three sons, Carmine, Frank and John and a stillborn daughter named Justine.

In 2002, her father breathed his last in a federal prison after suffering from head and neck cancer. Victoria Gotti  wrote an obituary of her father and published it in The New York Post on the day of his funeral.