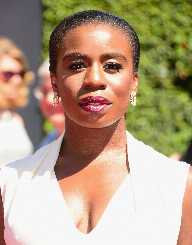 Uzo Aduba, also known as Uzoamka Nwanneka is an award-winning actress, best-known for her performances in the series 'Orange is the New Black' where she plays 'Crazy Eyes' role. Her outstanding performances have earned her several awards and nominations such as the 2017 Primetime Emmy Awards as an excellent supporting Actress in a Drama Series. These awards have brought her fame and commendation.

Uzo Aduba was born on February 10, 1981, to Nigerian Parents of Igbo origin, in Boston Massachusetts. However, she was raised in Medfield and enrolled in Medfield High School where she graduated in 1999. Later on, Aduba joined the College of Fine Arts at Boston University where she studied classical voice and participated in track and field competitions.

While at the University, Uzo Aduba cultivated the love for acting because her teachers encouraged her more to pursue acting rather than a vocal career. Her interests in acting motivated her to move to New York to pursue her acting career. Interestingly, her family enjoys sports and her younger brother, Obi, played hockey in six professional seasons at the University of Massachusetts.

Uzo Aduba arrived in New York in early 2000 for her acting career and took outstanding performances. However, she started rising to fame in 2003 after her performance at Olney Theatre Center for the arts in ‘Translations of Xhosa’ play, This play earned her a nomination award as the Outstanding Supporting Actress.

Remarkably, this performance opened doors to later opportunities such as 2006 performance at New York Theatre Workshop where she played the character Amphiarus followed by 2008 performance at Jolla Playhouse. Uzo Aduba also made other performances such as in ‘Notes’ of 2005 and ‘Over There’ of 2007.  In the same year, she played Toby in 'Coram Boy' at Imperial Theatre.
Additionally, from 2011-2012, Uzo Aduba participated in the original cast of 'Godspell at Circle' in The Square Theatre where she sang ‘By my Side.' During the same period, she made her first television appearance as a nurse on 'Blue Bloods' and also played as a mother character in 'Venice' at The Public Theater in New York.
In mid-2012, she auditioned for the Netflix series; ‘Orange is the New Black.' Fortunately, she got accepted for her role as ‘Crazy Eyes’ which won her several awards such as the 66th Primetime Creative Arts Emmy Awards, the 4th Critics Choice Television Awards, and the 18th Satellite Awards. Uzo Aduba made her season two performance of the series which led to several awards.

She was recognized as an Outstanding Female Actor in a Comedy Series and got nominated at the 72nd Golden Globe Awards as the Best Supporting Actress.
In 2015, Uzo Aduba won a second Primetime Emmy Award as the Outstanding Supporting Actress in a Drama Series, at the 67th Primetime Emmy Awards. Remarkably, her season three performance earned her more recognition as the Outstanding Female Actress in the 22nd Screen Actors Guild Awards and the best-supporting Actress at the 73rd Golden Globe Awards.
Besides her series performances, Uzo Aduba teamed up with Rachel Bay Jones in March 2014. They made a musical performance of the 'Lily’s Eyes song' from 'The Secret Garden' at a benefit concert Broadway Cares/Equity Fight Aids. Later in April 2017, the Point Foundation awarded her with a Courage Award for unflinching support of the LGBT community.

In 2017, Uzo Aduba has also been recognized for her outstanding and supporting roles as an Actress in the comedy and drama series. The awards included the Screen Actors Guild Award, NAACP Image Award, and the Primetime Emmy Awards.