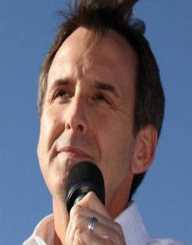 Tim Pawlenty was born on November 27th, in 1960. He is not only a famous politician but that he is a successful businessman. As a politician, he once served as Minnesota’s governor. His tenure began in 2003 and ended in 2011. Before this, he was a member of the Minnesota House of Representatives from 1993 to 2003.

Timothy James Pawlenty was born on November 27th, in 1960. His place of birth was in Saint Paul, Minnesota. He was the son of Virginia Frances and Joseph Pawlenty. His father worked as a milk delivery man. Tragedy struck the family when Pawlenty was only 16 years old. His mother passed away after battling with cancer.

Initially, Tim Pawlenty wanted to become a dentist. Therefore, this motivated him to join the University of Minnesota. Nevertheless, he soon changed his mind and went ahead to intern David Durenberger’s office, who was a U.S. Senator at the time. Pawlenty completed his studies in 1983 graduating with a degree in political science.

Three years later, he earned his Juris Doctorate. It is while studying at the University of Minnesota Law School that he crossed paths with his future wife called Mary Anderson. The two tied the knot in 1987.

In 1992, Tim Pawlenty joined the Minnesota House of representatives after emerging victorious from the elections that were held.

Tim Pawlenty's first interest in running for the office of Minnesota governor came in 2002. However, party leaders talked him out of the idea because Brian Sullivan was largely favored. During this time, he tried his luck running for U.S. Senate, but he also stepped down after being convinced by Vice President Dick Cheney. He then decided to run for the office of governor against Sullivan, something that he had been discouraged to do.

Tim Pawlenty managed to win the 2002 elections amassing 43.8% of the total votes. Later on, he ran for the same post and emerged the winner in 2006.

Tim Pawlenty wedded Mary Anderson, a judge and an attorney in 1987. The two have been blessed with two daughters in their relationship.