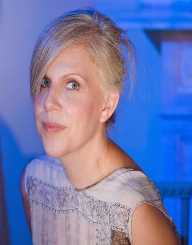 Tanya Donelly is an American recording artist and songwriter famous with her band Belly.

Tanya Donelly was born in Newport, Rhode Island, the USA on July 14, 1966. Her parents Richard and Kristin Donelly worked between Rhode Island and California in her early years. In her early days in grammar school, she met Kristin Hersh. They formed a lasting bond of friendship. In the early 180s, Richard Donelly divorced his wife and later married Kristin Hersh’s mother, also a divorcee.

The two classmates became stepsisters. Donelly and Hersh had a liking for music. In 1980, each got a guitar present from their biological fathers. For the next year, they practiced music dong cover songs of the British rock band The Beatles. Hersh’s father wrote some songs for them. Soon, the two girls started playing their own compositions.

When Donelly turned 15 in 1981, she formed a duo band with her stepsister Kristin called Throwing Muses. She added other members as the year went by. Kristin became the band leader, while Donelly backed her as the lead guitarist and songwriter. In 1986, they signed a recording contract in Boston with the British label 4AD. Throwing Muses became the first American band to operate with the British entity. Between the two, they produced songs like Green, Pools in Eyes, Dragon Head, Angel, Fish, Dizzy and the Real Ramona.

Donelly joined former Throwing Muses bass guitarist Kin Deal in forming an ad hoc band called Breeders. They performed in several events during 1990. They recorded the song Pod among others. In 1991, the duo in Breeders started having managerial frictions. Deal felt he was the able leader of the band, while Donelly felt it was her idea to form the band. Feeling frustrated and sidelined by her partner, Donelly left the Breeders band and formed another band called Belly in December 1991. She then left throwing Muses to concentrate on new formation.

As the bandleader, vocalist, songwriter, and occasional guitarist, Donelly incorporated some former throwing Muses band members in her new band. She did some backup vocals with the Breeders band until 1992 when she terminated her working relations with the band. In 1993, she recorded the much-acclaimed album Star LP. The success of the album gave her two Grammy Award nominations in 1994. Her second album King did not generate the success of the first one.

She left the Belly band and concentrated on other projects for a while. Between 1995 and 2000, Donelly worked with other musicians as a backup artist. She blended her vocals in the 1995 album Happy Days by Catherine Wheel. In November 1996, she did a musical tour with a quickly assembled band of artists. She did a recording with the group B-Sides in 1997. She then decided to venture into a solo career, but occasionally getting back with to recording with some invited artists.

Donelly did her first solo album in 1997 titled Lovesongs for Underdogs. She did a tour to popularize her album in North America. After the musical tour, she accompanied her husband to Central America. She took a sabbatical to welcome her first daughter in 1999. She decided to nurture her new family before going back to music. Donelly returned to the recording studios in 2002. She recorded Storm EP late in 2002. She did another album titled Beautysleep in 2002. The album journeyed through her maternal experiences. The album had its most popular hit in the song The Night You Saved My Life.

In 2004, Donelly released her next album Whiskey Tango Ghosts. Deviating from the past, she released the album with a large component of acoustic tunes, steel drums, and heavy piano tones. The experiment aroused little interest in the music world. In 2006, Donelly revisited her childhood with her release of the album This Hungry Life both in Canada and in the US. Live audience recording was done in Vermont for all the albums ten songs. She sang about nature, religion, divinity and spiritual hypocrisy facing the world today. The album brought back some vigor in her musical journey after a poor performance by her last album.

In August 2013, she collected musicians from different genres to record a sequel series album The Swan Song Series. The series of recorded songs were put into a collection of three CDs and distributed by American Laundromat Records from May 2016. All the CDs were sold on the online market platform.

Donelly went on a tour of Europe in 2016. The tour recaptured her earlier songs and other artists who accompanied her. She used the tour to thank her fans and other stakeholders for their continuous support in her career.

As a musical prodigy from Newport, she managed to create a niche for herself over the years. Her ambitious nature took her through several musical outfits before settling on a solo career. She considers her long career to be part of her natural tendency of experimenting with new ideas.

Through the years she has learned to work with various artists from different musical backgrounds to formulate a blend of captivating musical tunes.