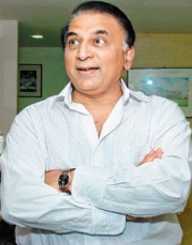 Sunil Gavaskar played cricket in the 1970s and 1980s.  Sunil Gavaskar set world records and is considered one of the greatest opening batsmen in the history of the sport.

Sunil Gavaskar was born on July 10, 1949, in Mumbai, India.   His parents Manohar and Meenal raised him in a middle-class family.

Cricket was a part of his household.  His father played well, and his uncle on his mother's side of the family was a former wicketkeeper for the Indian Test.

While in secondary school, Sunil Gavaskar was named India's Best Schoolboy Cricketer of the Year in 1966.   Sunil Gavaskar attended St. Xavier College, which was well-known for its cricket team.  His first-class debut was with the Vazir Sultan Colts XI during the 1966-1967 season.

Sunil Gavaskar's success in college led to his selection on the 1970-1971 Indian team.  His test debut was against the West Indies in March 1971.  In that first year that Gavaskar played international cricket,  Sunil Gavaskar scored 774 runs in his debut test series on the West Indies tour.

With such an excellent start to his international career,  Sunil Gavaskar had established high expectations for himself in the eyes of his fans.  The pressure got to him when he went on his next tour.  In England, he did not repeat his success.  However, he continued to play well for the team.

Sunil Gavaskar was captain of the Indian team in the late 1970s to the early 1980s.  However, most of his games ended in a draw because he was too conservative.   Sunil Gavaskar was replaced by leading pace bowler Kapil Dev.

After a few years, Sunil Gavaskar returned to the captain position but was later replaced by Dev once again. Even when India was not winning their test matches,  Sunil Gavaskar proved his ability time and time again.  His final Test was India versus Pakistan at Bangalore in March of 1987, and he retired officially after the 1987 Cricket World Cup in India.

After cricket, Sunil Gavaskar kept busy with some activities.   Sunil Gavaskar also continued following the sport as a commentator and adviser to the India national cricket team.  For a time, he was the Chairman of the ICC cricket committee.