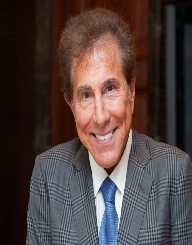 Steve Wynn is an American business magnate best known for his high-end casinos, most notably the Bellagio

Steve Wynn was born as Steven Alan Weinberg on 27 January 1942. Raised in Utica, New York, Wynn was educated in the all-male private Manlius School in Syracuse. Wynn received a B.A from the University of Pennsylvania. When his father died, Wynn assumed control of his bingo hall business.

Achieving success with his bingo business, Steve Wynn moved to Vegas where he ran an alcohol importing company and bought a stake in the Frontier Hotel and Casino. He also gained a controlling stake in the Golden Nugget Casino. Wynn turned the Golden Nugget into a casino resort complex. The Golden Nugget attracted a high-end clientele, and Wynn hired Frank Sinatra as a headline act for the resort.

Following his success in Las Vegas, Wynn built a Golden Nugget casino in Atlantic City. It quickly became the most profitable casino in Atlantic City. Wynn sold it for four hundred and forty million dollars in 1987. Returning to Las Vegas Wynn opened the Mirage Hotel and Casino on the Las Vegas strip. The construction cost six hundred and thirty million dollars, and the Mirage opened its doors in 1989.

Like with the Golden Nugget, Wynn aimed his new casino at a high-end clientele. It was hugely successful and led to a building boom in Las Vegas as several people attempted to copy his success. The Mirage also hosted noted entertainers Siegfried and Roy and Cirque du Soleil. His next Las Vegas complex was the Treasure Island Hotel and Resort which focussed on attracting families with its pirate themed design. The Treasure Island Hotel and Casino gave Cirque du Soleil a residency.

In 1998, Steve Wynn opened the Bellagio on the Las Vegas Strip, although it cost 1.6 billion dollars Wynn’s success once again sparked a building boom in Las Vegas. The Mirage resort was sold to MGM in 2000 for 6.6 billion, Wynn, now a billionaire used his money to finance the construction of Wynn Las Vegas privately.

The complex cost 2.4 billion dollars and was home to clubs, restaurants, hotel, casino and Las Vegas Strip’s only golf course. Wynn also expanded his operations to Macau, the most significant gaming region in the world. Wynn retains considerable casino and hotel interests in Macau, Las Vegas, and Massachusetts and is worth an estimated 2.9 billion dollars.

Steve Wynn is a keen art collector and has spent hundreds of millions of dollars collecting works from artists such as Rembrandt, Monet, and Vermeer. In 2006, Wynn put his elbow through the canvass of the Picasso piece Le Reve, which had the estimated value of eighty-five million dollars.

Steve Wynn has been married three times to two women. He married Elaine Pascal in 1963 and divorced in 1986. The two remarried in 1991 and divorced a second time in 2010. They have two daughters together, Kevyn and Gillian. Kevyn was kidnapped in 1993, and a 1.45 million ransom was paid. The kidnappers were arrested, and Kevyn was returned unharmed. Wynn married Andrea Hissom in 2011.