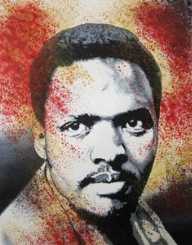 Steve Biko was a political activist who came to attention for his anti-apartheid beliefs and active involvement for the betterment of the African community in the United States during his time.

Steve Biko met and married his wife Nontsikelelo "Ntsiki" Mashalaba who was working as a nurse in Durban. The two wed in December 1970 and had their first child the following year in 1971 named Nkosinathi, and another child followed named Samora. While also being an active member at the Black Conscious Movement, he made the acquaintance of Mamphela Ramphele of which brought forth two children: Lerato and Hlumelo. Lerato died during infancy from suffering pneumonia. He also had a relationship in 1977 with Lorraine Tabane who gave birth to a daughter named Moltasi.

Born as Bantu Stephen Biko on December 18, 1946, he grew up in Ginsberg town in Eastern Cape. He came from a low-income family with three other siblings; an older brother and sister, and a younger sibling. His parents Alice "Mamsete" and  Mzingaye Mathew Biko. His father got into an accident when he was four years old and eventually died leading to the siblings being raised by their mother alone.

Growing up, Biko was fondly called "Goofy" and later due to his unkempt appearance as "Xwaku-Xwaku." He started his early education at St. Andrew's Primary School and later transferred to Charles Morgan Higher Primary School. Due to his intellect, Biko became an accelerated student and managed to advance a year in class. He entered St. Francis College from 1964 to 1965 wherein he made his transition from adolescence to manhood when he underwent the ulwaluko circumcision ceremony located in Zwelitsha in December of 1964.

Due to his intellectual abilities, Steve Biko managed to secure a scholarship at the University of Natal Medical School in Durban and took a degree in medicine. Initially, he intended to pursue a law degree, but friends and colleagues discouraged him from doing so since it was closely entwined with political activism at the time. Regardless of their advice, he managed to become a member of the Student's Representative Council (SRC) which is connected to the National Union of South African Students (NUSAS).

The Father of Black Consciousness

Steve Biko's lifelong commitment to the Black Movement's cause was solidified and put into motion when he got elected as the president of the newly established South African Students' Organization (SASO) which was established at the University of the North in July 1969. The group's mission was to connect all student activities of black people be its cultural activities and sporting activities to name a few.

Although it significantly contributed to students of African origins, Biko's political activity became too intense that he was expelled from the university. Following his expulsion, he co-established another group bent on the improvement of the African people called the Black People's Convention which he remained politically active in from the early to mid-1970s.

Shortly before his death, Steve Biko was banned by the apartheid regime to express himself publicly either in words or actions to the media. He was only allowed to speak to one representative at a time but never in a group and was even arrested and held in prison multiple times for his involvement.

In 1977, Steve Biko was scheduled to meet Unity Movement leader Neville Alexander and in the process of doing so broke his banning order by traveling to Cape Town. Alexander refused to meet with Biko, so Biko and his colleague ended up driving back to William's Town when they were stopped at a roadblock in Grahamstown on August 18, 1977.

He was under the grounds of violating his order ban, and he was taken to Warmer's Police Station in Port Elizabeth. His legs were shackled and were held in prison naked. He was believed to be beaten while detained in jail and on September 11, police found him naked and injured and drove him to the hospital, but his injuries were too severe that he died the following day on September 12, 1977. His cause of death was due to an extreme head injury which resulted in other organ failures according to the autopsy report.

Steve Biko's death not only shocked but angered the Black community as well as his supporters which triggered protest meetings all over the country.  His funeral service was later described as the first mass political funeral in the state which was attended by prominent figures with over 20,000 people who joined in attendance.