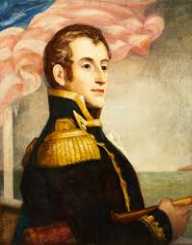 Stephen Decatur was born into a family of a naval officer. His father was a naval captain during the American Revolutionary War. Born on January 5th, 1779 during the War, Decatur became the youngest man to reach the rank of captain in the history of the United States Navy. He served in a total of three major wars and made US navy a superpower with his exceptional leadership qualities and by achieving victories in consecutive wars. He also constructed and commanded many new navy vessels.

Stephen Decatur initial tryst with the seas was of somewhat cinematic. When he was only eight, he developed a nagging cough which became severe day by day. Exposure to the salty air of the seas was thought to be a perfect remedy to such a condition. So, it was decided that Decatur would accompany his father on his next mission to Europe. The voyage over the Atlantic proved to be a perfect therapy as Decatur came back totally recuperated.

His parents though wanted him to become an Episcopal clergyman, and thus he enrolled into the Episcopal Academy and after that in the University of Pennsylvania in 1795. But, the sea was beckoning him, and a young Decatur couldn’t concentrate and had to give up his studies at the age of 17.

Stephen Decatur got a job of a supervisor at the shipbuilding firm of Gurney and Smith. He was designated to oversee the construction of the frigate United States. In 1798, Officer John Barry obtained Decatur's appointment as a midshipman on United States. During his early naval career, Decatur learned the arts of naval war under Barry and also from Commodore James Barron. Decatur had a tutor too, but he also gained practical training.

On May 22, 1799, Stephen Decatur was promoted to lieutenant by President John Adams at a time when independent America was struggling to protect its ships. The French were intercepting their ships as they were enraged that America continued their trade with Britain, the country with whom they were fighting against. Another reason was America refused to pay their debts.

While Decatur was recruiting men for a vessel, he got into a tiff with a first officer of an East India ship. The insulting remarks against the US Navy infuriated Decatur who, on his father Decatur Sr.’s suggestion, challenged the guy for a duel. Decatur, being an expert shot with a pistol, endeavoured only to injure his opponent in the hip and thus there was no fatal outcome.

Stephen Decatur was transferred to the brig USS Norfolk. In the following months, USS Norfolk destroyed 25 enemy ships. Soon after, Decatur transferred back to United States.

On May 13, 1801, Stephen Decatur served as the first lieutenant on the frigate USS Essex. In September 1802, Decatur got transferred to the 36-gun frigate USS New York under Commodore James Barron, as the first lieutenant. Adverse weather conditions forced the ship to halt at Malta. A tiff with a British officer resulted in Decatur returning to the United States where he took over the 18-gun brig USS Argus. While sailing toward Gibraltar, he transferred the ship to Lieutenant Isaac Hull. In exchange, Decatur took over a 12-gun schooner USS Enterprise.

On December 23, 1803, USS Enterprise and USS Constitution confronted the Tripolitan ketch Mastico and captured the ship, killing the few men on board the vessel. Mastico was subsequently renamed USS Intrepid.

In late 1803, the frigate USS Philadelphia was captured by Tripolitan forces. By that time, Tripoli had already declared war against the United States. Commodore Edward Preble designed an audacious plan to destroy USS Philadelphia which resulted in Decatur sailing with 80 odd men on USS Intrepid.

The ship was disguised as an ordinary Maltese merchant ship and was draped in British colours. Five Sicilian volunteers including an Arabic speaking pilot Salvatore Catalano were on board to enhance the authenticity of the ploy. Catalano helped the ship tie up with Philadelphia by citing the pretext of lost anchors. As they got within touching distance, Stephen Decatur and his men attacked and killed around 20 Tripolitan crew members and recaptured Philadelphia.

But the vessel was in no condition to set sail, and Stephen Decatur realized that Intrepid was too small to tow such a big ship out of the harbour. He decided to set ablaze the warship. It is reported that Decatur was the last man to abandon the blazing ship. The guns aboard Philadelphia got triggered due to the heat and flames and started firing involuntarily in all directions.

Decatur and his men just managed to escape with the help of the accompanying ship Syren who covered them against the retaliation from Tripolitan forces across the shores. Vice Admiral Lord Horatio Nelson dubbed the brilliant achievement as "the most bold and daring act of the Age.”

Stephen Decatur was subsequently promoted as Captain at a mere age of 25, making him the youngest ever man to get that honour. Preble decided to attack Tripoli again shortly after this victory. Although they eventually triumphed again, Decatur lost his brother James Decatur when he was attacked by a Tripolitan captain. Decatur succeeded in taking revenge by shooting the captain with the latter’s pistol from a point-blank range following a fierce battle on board the enemy ship. For the rest of the war, Decatur commanded the frigates Constitution and Congress till 1805.

In 1808, Stephen Decatur served on the court-martial of Commodore James Barron for his role in the Chesapeake-Leopard Affair where he was accused of being underprepared and was relieved of his duties for five years. The captain of HMS Leopard suspected deserters on board the ship Chesapeake and attacked it, forcing a hapless Barron to surrender. The Chesapeake-Leopard Affair garnered a lot of public attention at that time.

With the advent of the War of 1812, then President James Madison sent for several naval vessels to patrol the American coastline. In Norfolk, Stephen Decatur came across Captain John Carden of the frigate HMS Macedonian, who betted a fur beaver hat that Macedonia would defeat Decatur’s frigate United States if they ever met in a battle. Two years later, during the war with Britain, they did meet each other, and Carden lost the bet as Macedonian was poorly left battered and bruised by Decatur’s United States. Carden was left with no option but to surrender. Decatur was greeted with happy scenes of celebration in New York on December 4, 1812, when he returned with his new prize Macedonian.

Macedonian was repaired, and it set sail along with UnitedStates and another sloop Hornet in May 1813. However, they ran into a blockade and remained trapped in New London, Connecticut. Decatur and his crew were soon transferred to USS President in New York. Later Decatur tried to escape, but his plan failed as he suspected the residents of the area betrayed him.

In 1814, Stephen Decatur was appointed by Secretary of the Navy William Jones to lead a four-ship squadron which included USS President as the nucleus of the operational unit. While sailing home, it was pounded by four British frigates HMS Endymion, HMS Pomone, HMS Majestic and HMS Tenedos. Decatur battled hard and dismantled Endymion but lost a big chunk of his crew. He was forced to surrender and was taken as a prisoner to Bermuda. Next month, he returned to his country on HMS Narcissus.

The Conqueror of Barbary Pirates

In the Second Barbary War, Stephen Decatur commanded the frigate USS Guerriere. In June 1815, Decatur defeated the infamous Rais Hamidou and captured his frigate Mashouda in Algiers. After setting things straight with the Government in Algiers, Decatur travelled to Tunis and Tripoli to demand the reimbursement of proceeds from the War of 1812. His demands were promptly met, and after this victorious campaign, he was referred to as "the Conqueror of the Barbary Pirates."

After the war ended, Stephen Decatur was bestowed upon with a sword as a reward for his service in Tripoli and was also awarded the Congressional Gold Medal for his exceptional performance in the War of 1812. In 1816, Decatur was inducted into the Board of Naval Commissioners in Washington DC.  Famous architect Henry Latrobe designed his three-storey red brick house in Washington on Lafayette square.

Decatur’s participation in the court-martial of James Barron in the Chesapeake-Leopard affair came back to haunt him four years later when Decatur was challenged to a duel by the Commodore. Before the fight, Barron wanted to conciliate with Decatur, but it is believed that the seconds did not have any intention of stopping the duel from taking place.

While Decatur only intended to wound Barron by shooting in the hip, Barron shot him in the abdomen, which proved to be fatal. Stephen Decatur died at 10.30 p.m. that night. His funeral was attended by more than 10000 citizens and many eminent personalities including President James Monroe and the justices of the Supreme Court.