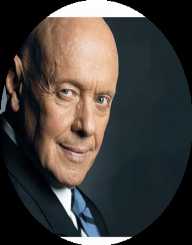 Stephen Covey was also a professor at the Jon M. Huntsman School of Business at Utah State University.  Through his books and addresses, Stephen Covey inspired many people with the power of universal principles. Being named among the 25 influential Americans by Times magazine, Stephen Covey has his name cemented as one of the world leading organizational experts leadership mentor.

Stephen Covey was born on October 24, 1932, in Salt Lake City, Utah to Stephen Glenn Covey and Irene Louise Richard Covey. Growing up, Covey had aninterest in athletics but had to change thefocusto academics because he contracted slipped capital femoral epiphysis in Junior high school. With his focus now on education, Covey was a member of his school’s debate team. He had his university education at the University of Utah where he graduated with a Bachelor of Science in business administration. He later earned an MBA from Harvard University and at Brigham Young University, he earned a Doctor of Religious Education.

Stephen Covey became the Assistant President of the Brigham Young University and also served as the professor of business management there. As a professor of the Marriott School of Management at Brigham Young University, he helped introduce the Master of Organizational Behavior program and had since been merged into the MBA program of the institute. During this time, he pursued his Doctor of Religious Education degree. Peter Covey has authored several booksand that has been his trademark. Some of his prominent books areSpiritual Roots of Human Relations, published in 1970. The book explores the background of relationship problems and prescribes how these can be solved in a spiritual way. Readers are given adiversespiritual method to choose from.

He came out with The Divine Center in 1982 which was a devotional book for the Latter-day Saint Church. To enable him toachieve his business visions, Covey had resigned from his position a President and professor of Brigham Young University to start the company Stephen R, Covey and Associates in 1985. It was aimed at equipping organizations and individuals with productivity tools and training. The name of the company was later changed to Covey Leadership Center in 1987 and merged Franklin Quest to form FranklinCovey. The company mission statement reads, "We enable greatness in people and organizations everywhere."

In order to assist and give guidance to people struggling in the economic downturn, Stephen Covey established a webinar in 2009. It was also to make materials accessible on a timely basis.

Stephen Covey was married to Sandra Covey and had nine children. The family until his death lived in Provo, Utah, Brigham Young University where he taught. He died on July 16, 2012, after suffering from complications from a bike accident. He died at the Eastern Idaho Regional Medical Centre in Idaho Falls, Idaho. Stephen Covey fell off his bike and hit his head on the pavement after he lost control of his bike during a ride in Rock Canyon Park in Provo, Utah. According to his daughter, Catherine Sagers, though her dad was wearing a helmet, it slipped making him suffer head injuries. He also cracked his ribs and had partially collapsed lungs.

Stephen Covey has been awarded and honored with the following,