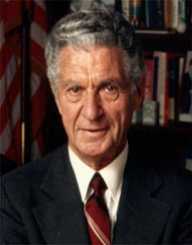 Sol Myron Linowitz was an American diplomat who helped negotiate the peaceful return of the Panama Canal from the US to Panamanian control.

He excelled in his elementary school and proceeded to high school. In 1931, he graduated from Trenton High School. He enrolled for a degree course at Hamilton College. Linowitz delayed his entry due to financial difficulties. He commenced his studies on a partial scholarship. Linowitz supplemented his fees by operating a small business while studying. In 1935, he graduated with a Bachelor of Arts from Hamilton College in New York. After graduating, Linowitz wanted to be a Jewish cleric. He dropped the idea after his friend Elihu Root convinced him otherwise.

He got admission to Cornell School of Law. He graduated from the Law School in 1938. Linowitz was a bright student. During his time at Law School, he rose to become the chief editor of the faculty journal, Cornell Law Quarterly.

In 1939 Linowitz got a job in a legal firm Sutherland and Sutherland in New York. He joined the military when the US joined WW2. He was never deployed to combat due to a knee injury. Linowitz was seconded to the Office of Price Administration in Washington D.C. In 1946 he went back to New York. Linowitz resumed his legal career.

While in New York, Linowitz met Joseph Wilson. Wilson was the president of Haloid Corporation, later Xerox Company. Linowitz facilitated Haloid Corporation to get a license agreement to operate a photocopying business. In 1959 Haloid made its maiden photocopier machine. Linowitz became the vice president of the company. He also doubled as the chief legal advisor. He was co-opted into the board from 1960 to 1966.

In 1966 he resigned from Xerox. He became the US representative to the Organization of American States or OAS. During this time, Linowitz was also the US advisor and representative to the Inter-American Committee on the Alliance for Progress. He left the public service after Richard Nixon became president of the US. He practiced law at Coudert Brothers Law firm from 1969 to 1994.

In 1977 President Jimmy Carter appointed him the head of the negotiating team in the Panama Crisis. Linowitz faced stiff opposition at home. Americans believed they owned the Panama Canal since they financed and built it in the early 1900s. Ronald Reagan, the future president of the US led the opposition onslaught to the talks. In Panama, the citizens viewed the American control of the canal as a national shame. Linowitz managed to balance the interests of the two parties. He negotiated the peaceful return of the canal to the Panamanian government while holding on to the best interests of the American people. Linowitz submitted his report to the president. In 1979 the report was ratified by Congress. The US returned the full control of the canal to Panama on December 31, 1999.

In 1979 he was reassigned to the Middle East. He became the US Special Envoy to the region. Linowitz was mandated to broker peace deals between the Palestinians and the Israelis. Linowitz oversaw the implementation of the Camp David Treaty between the Israelis and Egyptians.

Linowitz served as the presidential advisor on Latin America and Middle East Affairs to three presidential administrations. He was an advisor to Presidents Lyndon Johnson, Jimmy Carter, and William Jefferson Clinton.

Apart from practicing law and diplomacy, Linowitz was a publisher and humanitarian. In 1974 he published This Troubled Urban World. In 1980 he published an account of his diplomatic life in the book, The Making of a Public Man: A Memoir.

He was a member of the Academy for Educational Development. This was a charitable organization responsible for the advancement of the less fortunate in society. In 1998 he was honored by President Clinton for his work in trying to forge peace in the world. He got the Presidential Medal of Freedom.

Sol Linowitz died on the 18th March 2005 in the US capital Washington D.C. of pneumonia. He is remembered as the astute diplomat who led a treacherous journey leading to the Panama Crisis deal. He was also a scholar who sat in various university boards across the US.