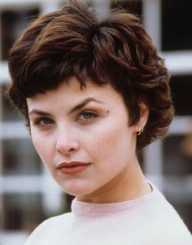 Sherilyn Fenn was born on the 1 February 1965 in Detroit, Michigan into a musical family. Her parents were divorced when she was young and for a time she lived a transitory lifestyle with her mother.

After moving to Los Angeles, she dropped out of high school and enrolled at the Lee Strasberg Theatre Institute.

In 1992 she was in Of Mice and Men alongside John Malkovich, and she also appeared in Boxing Helena (1993). She also starred in Ruby, Rude Awakening and Two Moon Junction. She went on to appear in numerous television including Ray Donovan (2014) Sherilyn Fenn also played Elizabeth Taylor in Liz: The Elizabeth Taylor Story and was in The Gilmore Girls (2003-2007).

Fenn dated Johnny Depp as well as Prince before marrying Toulouse Holliday (1994-1997). The couple had one child together, a son Myles. After her divorce from Holiday, she had a son with Dylan Stuart.