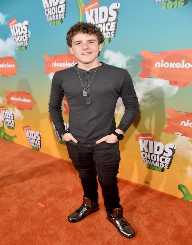 Sean Ryan Fox was born in Riverside on August 30th, 2001 in California. He was born to a family of three other siblings. When he was two years old, his mother found him singing along in his sister’s room, using the karaoke. He is the family’s youngest of the siblings.

He was known to perform his script at home when he was just six years old to the thrill of his family. He was a delight in his self-scripted roles and scenes.

While for many people, getting the needed acclaim or some measure of success comes at a later age, Sean Ryan Fox accomplished his as he got to age 20. He was already a millionaire by that age. His parents took note of his displays and realized that he was keen to showcase his skills. They gave him all the support to horn his performing skills

Even as a youngster in elementary school, Sean was already treating his schoolmates to exciting times by performing for them. He wrote his plays, and he took time to act them to the delight of his school audience.

As he turned 8, Sean was already more renowned than the small town that he was given to in the sleepy suburbs in Riverside. His parents became proactive and moved him to Hollywood so that he could access professional finishing skills.

Sean Ryan Fox’s parents succeeded in getting him an agent, and after that, Sean’s career gathered the desired momentum with no let-up. At the very least, his experienced agent ensured he got the props he needed.


In The Big League

As his agent reached out to clinch the needed offers, Sean Ryan Fox was successful with an initial spell of commercials. After completing his two auditions that came along initially, the commercials hit the big screen. This gave Sean the needed exposure, and the television series was his next port of call.

ABC gave him an anchor to hold with the TV series, Criminal Minds. This popular show gave Sean the needed break, and he came instantly recognizable in Hollywood. He went on to star in First Family on KCAL 9 as well as 'Kickin' It' on Disney Channel XD.

Sean Ryan Fox’s performance in the TV series, 99 was one that lit up the ratings for him, and he amassed a significant following after that. This was sure to stamp Ryan’s face like a Hollywood insider with ease.

When Sean Ryan Fox completed a row of TV series, he was primed to star in other series that were directed at children. He landed a spot in Ho Ho Holiday special on Nickelodeon. Going forward, he starred in Henry Danger for another Nickelodeon production. This was a recognizable blockbuster for Sean. It was created as a superhero character by Dan Schneider.

Henry Danger had a plot that was woven around the life of a 13-year-old who loved adventures. He became the alter-ego of a suburban hero, who confronted evil elements at work around the city. Sean played the role of Jasper on the set as a friend of Henry, the lead character. Jasper was replete with ideas and the cutting-edge, innovative bent whenever crisis called.

Many youngsters and kids loved his skills on set, and Sean Ryan Fox became an all-American teenage darling in no-time. When there are shows targeted at kids in America, producers set out to include Sean on the cast.

Sean Ryan Fox put his voice for Fox‘s Lincoln Loud when the Nickelodeon series was unveiled. He soon exited the animated series when his voice change materialized. This made it necessary for the producers to get a replacement for his role and they picked Grant Palmer.

Sean was also the voice for Jake in Jake which shows on Fox. He was also on audio for Never Land Pirates, and he came in as a replacement for Cameron Boyce. He, in turn, got replaced by Riley Thomas Stewart after that as he went past teenage prime.

Sean is also reputed for his role in David's Dinosaur as well as on Field of Lost Shoes by Sean McNamara. The latter was shot in various locations around Virginia. He also starred in the film, Bereave, which also featured Malcolm McDowell and Jane.

Sean Ryan enjoys time on the drums when he is not on set. He also does time on Legos for personal delight. There are reports that he also comes strong on Transformers during his leisure.

Sean Ryan Fox no doubt is best acclaimed for his Nickelodeon roles, and all pointers go in the direction of Jasper, in Henry Danger. This is a unique role that many people are going to point at down the years.

Apart from his on-screen talent, Sean Ryan Fox is reputed for his singing voice. He is credited with several skills, and that puts him in good stead for some roles. His physical features are also notable, and his curly hair comes up for the mention. This is one feature that stands him out in any crowd.