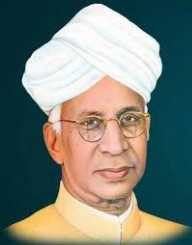 Sarvepalli Radhakrishnan was born on the 5 September 1888 in a village near Thiruttani in India. His parents were Sarvepalli and Sitamma Veeraswami.

Sarvepalli Radhakrishnan attended K.V. High School in Tiruttani, then enrolled at the Hermannsburg Evangelical Lutheran Mission School. He also went to the Elizabeth Rodman Voorhees College (1900-1904) run by the American Arcot Mission of the Reformed Church of America. Between 1904 and 1908 he studied at Madras Christian College. He began his MA in 1906 and completed it in 1908.

After graduating Sarvepalli Radhakrishnan worked at the Madras Presidency College in the Department of Philosophy (1909-1918). He then taught at the University of Mysore (1918-1921). Sarvepalli  Radhakrishnan continued publishing his interpretation of Hinduism between 1914 and 1920. Over eighteen articles were published in Western Journals including The International Journal of Ethics, Mind and The Monist.

In 1921, he was appointed to the George V Chair in Philosophy at Calcutta University. During his time there he worked on volume two of Indian Philosophy, which was published in 1928. In 1926 he delivered the Upton Lectures at Oxford and in 1929 the Hibbert Lectures at Harris Manchester College, Oxford.

Sarvepalli Radhakrishnan was knighted in 1931, the same year he took up the position of Vice-Chancellor at Andhra University (1931-1936). Oxford University appointed him as the H.N. Spaulding Chair of Eastern Religions and Ethics (1936-1939). In 1939, he was appointed Vice Chancellor at Benares Hindu University and remained there until January 1948. His next position was a chairman of the University Education Commission. He oversaw a report on the state of university education about a newly independent India.

Nationalism was a big issue in India during the 1930s, and the 1940s and Sarvepalli Radhakrishnan was aware of the link between education, patriotism and the role of tertiary education. He was vocal about his philosophy and ideas relating to education and an independent India.

Sarvepalli Radhakrishnan represented India at UNESCO between 1946 and 1952. And he was the Indian ambassador to the Soviet Union from 1949 until 1952.

In 1952, Sarvepalli Radhakrishnan was elected the first Vice-President of India. He served two terms and 1962; he became the second President of India. During this time, India was involved in various disputes, and internationally there was a lot of tension in the world with the Korean War, the Cold War, and other issues.

Sarvepalli Radhakrishnan was a prolific author, and his books include: Indian Philosophy (1923-1927), The Philosophy of the Upanishads (1924), An Idealist View of Life (1932), Eastern Religions and Western Thought (1939) and East and West: Some Reflections (1955)

Sarvepalli Radhakrishnan won many awards including the Bharat Ratna, the highest Indian civilian award (1954).  King George V of England knighted him in 1931, and he was elected a Fellow the British Academy in 1938. In 1963 he won the British Order of Merit.

The Sarvepalli Radhakrishnan Chevening Scholarships at Oxford University were named in his honour.

He was nominated for the Nobel Prize for Literature on many occasions and eleven times for the Nobel Peace Prize. Numerous institutions around the world presented Radhakrishnan with honorary degrees.

Teacher’s Day celebrated on the 5 September was the day chosen by Sarvepalli  Radhakrishnan (his birthday) to honour the hard work and dedication of teachers.

Sarvepalli Radhakrishnan married  Sivakamu in 1904, and they remained together until her death in 1956. They had six children, a son, and five daughters.