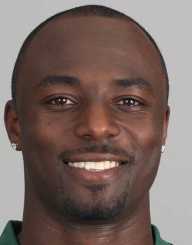 American football player Santonio Holmes was born in Belle Glade, Florida on the 3 March 1984 to a single mother in a poor neighborhood which had problems with crime at the time he was growing up.  His parents are Patricia Brown and Santonio Holmes, and he has three children, two girls, and a boy.

Santonio Holmes was a student at Glades Central High School in Florida where his talent at sport was recognized. He played basketball, football and was also a track athlete. After graduating from high school, he was then accepted into Ohio State University.

During his time at Ohio State University, Holmes played for the Buckeyes when they won the 2002 National Championship. He turned professional In 2006 when the Pittsburgh Steelers traded up seven spots in the NFL draft to pick him.

In 2017 Santonio Holmes briefly returned to the Pittsburgh Steelers when he officially retired from the game.

Santonio Holmes was named MVP of Super Bowl XLIII after he caught nine passes and a winning touchdown for the Pittsburgh Steelers.