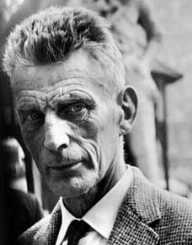 Samuel Beckett (1906-1989) was an Irish writer and Nobel Laureate, considered to be one of the most important writers of the 20th century. He lived in Paris for most of his adult life and published in both French and English. He was active in several literary genres, producing plays, poems, novels, short stories, and scripts for radio and cinema.

Samuel Barclay Beckett was born on the 13th of April, 1906 in  Foxrock, Republic of Ireland. The precise date of his birth is somewhat of a mystery as Anthony Croner, his autobiographer, notes. On the one hand, Beckett himself claimed, and insisted, that he was born on the 13th of April 1906, a Good Friday. On the other side, his birth certificate reads 13th of May, 1906.

He was born into a prosperous family. His father, William Frank Beckett, worked in the construction industry. His mother, Maria Jones-Roe, was a nurse. He had an older brother, Frank Edward Beckett, born in 1902. Beckett would later draw inspiration for his writings from the family’s large home and surrounding places.

Growing up, he attended Portora Royal School. Later on, starting in 1923, he studied languages (English, French and Italian) at Trinity College in Dublin. He graduated with a Bachelor of Arts degree in 1927.

Beckett was a fan of cricket, and he was very adept. He played two first-class games in 1925 and 1926 for Dublin University.

It was while in Paris that he met the Irish writer James Joyce, a character who would have a profound impact on Beckett’s career. Beckett became a part of Joyce’s circle and wrote some of his first published essays about Joyce’s work. Beckett soon began writing and publishing more of his work, including a short story and a poem. He returned briefly to teach at Trinity College but left the next year. This was his last teaching job, and from then on he dedicated himself to his writing.

During this period, he traveled through Europe and finished his first novel, Dream of Fair to Middling Women (1932). This autobiographical novel was not published until after the author’s death in 1993. However, it influenced other of his works, and he published fragments of it during his lifetime. In 1934 he published a short story collection titled More Pricks than Kicks.

As he continued his travels through Europe, he kept on writing and publishing poems and other works. In 1938, he published his second novel by the name Murphy (1938). Eventually, he decided to make Paris his permanent place of residence.

When World War II broke out, Beckett decided to stay in Paris and joined the French Resistance. He would make translations and store weapons on his property. The Gestapo nearly arrested Beckett and his partner, Suzanne Dechevaux-Dumesnil in August 1942. The resistance group he was working with was betrayed, and several of its members were arrested and taken to concentration camps. Dumesnil and Beckett managed to escape to the south of France, where they remained until the war ended. After the war, the French Government awarded Samuel Beckett the Croix de Guerre and the Médaille de la Résistance.

It was after the war that Beckett wrote his most well-known works. This period of his writing career was marked by breaking away from the influence of Joyce, and emergence of Beckett’s style. He wrote mostly in French and then translated his work into English. In 1952, he published the play En attendant Godot (in English Waiting for Godot), his most famous work.

The play was a success and became very popular in spite of some early poor reviews. It was first played in 1953 and continues to be popular up to this day. This play, which was described by a reviewer at the time as a “mystery wrapped in an enigma,” is a two-act movie in which two characters spend their time waiting for a third character named Godot, who never arrives. Beckett later published other successful plays, including Endgame (1957) and Plays (1963).

The later 60s began a different period in Beckett’s career, characterized by work that is shorter and more minimalist than earlier work. He wrote more often in English, and he also began writing for radio, TV, and cinema. In 1969, he received the Nobel Prize for Literature but refused to attend the ceremony.

Samuel Beckett is considered one of the most prominent writers of the 20th century. His work has influenced many writers and artists over the years. His plays, most notably Waiting for Godot, continue to be performed, and many musical compositions have been written based on his writing.

Samuel Beckett was linked to several women throughout his life. In 1937, he was in a relationship with the famous socialite Peggy Guggenheim. Shortly after, while in Paris in 1938, he suffered a nearly fatal attack. He was stabbed in the chest after turning down a pimp who approached him in the street. During his recovery, Suzanne Dechevaux-Dumesnil, a pianist whom he had previously met, began visiting him often. This marked the beginning of a lifelong relationship.

Suzanne died in July 1989 and Beckett only a few months later, on December 22. He suffered from emphysema and committed himself to a nursing home for the last months of his life, where he died. He is buried next to Suzanne in the Cimetiere du Montparnasse in Paris.