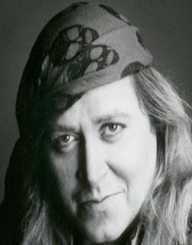 Sam Kinison was born on December 8, 1953. He was an American Standup Comedian. He was also an actor. He was a former Pentecostal’s preacher. He died at the age of Thirty-eight years.

He studied at East Peoria Community High School. He later joined his mother in Tulsa, Oklahoma. In 1968, he enrolled in Pinecrest Bible Training Centre, Salisbury in New York. He also learnt to play guitar in his leisure time. In 1970, he started preaching until 1977. He quit preaching after that. He later moved back to Houston, Texas. In 1980, he started comedy soon after his first divorce.

Sam Kinison's career sparked while he was in Houston, Texas. He performed in small clubs for entertainment. He later became a member of the Texas Outlaw Comics which was comedic group back at the Comedy Workshop. In 1980, he moved to Los Angeles. He worked as a doorman. In 1984, he tremendously performed in the Ninth Annual Young Comedians Special.

In 1985, he made his first television appearance in ‘Late Night with David Letterman’ show. He appeared in the film ‘Savage Down.’ He later embarked in Bible preaching evangelism. In 1986, he made his debut by appearing in ‘Back to School’ as Dr. Terguson. He also featured in ‘Three Amigos.’ He was later involved in the Los Angeles rock music scene.

In 1987, Sam Kinison's voice was featured in ‘I’m the Man’ which was Anthrax’s song. In 1988, he recorded ‘Wild Thing.’ He later released ‘Have You Seen Me Lately’ which was his album. He as well appeared in ‘Bad Medicine’ which was a music video. His comedy punch line ‘Dick in your mouth all day’ was used in ‘Beats to the Rhyme’ which was a song. In 1989, he was featured an episode of ‘Married …. with Children’ as Al Bundy’s guardian angel.

His voice was used in the song ‘The Kid Goes Wild.’  He later appeared in ‘Kickstart My Heart’ which was a music video. He then performed ‘Are You Lonesome Tonight?’ in Tonight Show television cast. He later appeared on several occasions in ‘The Howard Stern Show.’ In 1990, he featured in ‘Leader of the Banned’ song. In 1991, he appeared as starring in ‘Charlie Hoover’ a television show. He also appeared in the television show ‘In Living Color.’ In 1993, he was featured in ‘Live from Hell.’