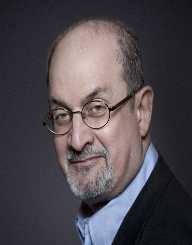 Salman Rushdie was born 19th June 1947, to Anis Ahmed Rushdie, and Negin Bhatt. He was born in Bombay, British India, into a family of four children, three girls, and Salman Rushdie. Salman Rushdie's father was a lawyer and businessman, and his mother was a teacher. The family was Muslim, which Rushdie acknowledged had an influence on him initially.

Salman Rushdie worked for two advertising agencies, Ogilvy & Mather, and Ayer Barker as a copywriter. He came up with several memorable slogans for brands such as Aero and the Burnley Building Society. Salman Rushdie's first novel was Grimus, released in 1975, which was mostly ignored. His second novel, Midnight’s Children, was released in 1981. This was to be the book that launched his career as a writer. Midnight’s Children won several awards, including the Booker Prize in 1981.

Salman Rushdie's next book was released in 1983, called Shame. His books were mostly set on the Indian sub-continent. It was his fourth book, The Satanic Verses (1988), that caused a furor throughout the Islam world. He was seen to be being irreverent to Muhammad, and the book was banned in most Muslim countries. The Ayatollah Khomeini of Iran, declared fatwa in February 1989, ordering the execution of Salman Rushdie. He went into police protection in the UK where he was living. Muslims throughout the world held rallies and some resorted to the violence of innocent parties such as people who had been involved in translating and publishing the book, causing injury and death

Salman Rushdie remained defiant, although he did try to explain the book away at one stage. Years later, in 2005, the current spiritual leader of Iran, Ayatollah Ali Khamenei, reiterated the death sentence still stood for Rushdie. The reward for doing the killing was increased to $3.3 million. There was a failed assassination attempt in 1989, with a shrine being built to the person who accidentally killed himself with the bomb he made. Rushdie was also named on the hit list of Al-Qaeda in 2010.

Salman Rushdie has written 11 novels, plus two children’s books. He has also released several collections of short stories, and many papers and non-fiction essays. As well as writing, Salman Rushdie is a mentor to young Indian writers.

In 2007, he was appointed Distinguished Writer in Residence at Emory University in Atlanta, Georgia for a five-year term. He followed thisSalman Rushdie in 2015 by becoming a Distinguished Writer in Residence at the New York University. In 2011, Salman Rushdie began writing a television series called The Next People. He announced it would be a science-fiction series, for the cable network, Showtime.

Salman Rushdie has received many honors and more than 30 major literary awards. He was knighted in 2007 in the Queen’s Birthday Honors.

Salman Rushdie’s first marriage was to Clarissa Luard in 1976. They had a son together, but they divorced in 1987.

In 1988, Salman Rushdie married Marianne Wiggins, a novelist from the U.S. They divorced in 1993.

Salman Rushdie's third marriage was in 1997 to Elizabeth West. Rushdie had his second son with West. The couple divorced in 2004.

In 2004, Salman Rushdie married again, this time to Padma Lakshmi. She was an actress and model. They divorced in 2007.

Salman Rushdie is involved in several charities, including The Lunchbox Fund which gives daily meals to students in the town of Soweto in South Africa, where he serves on the advisory board.

He is also the founding patron of Ralston College, a liberal arts college in the U.S.