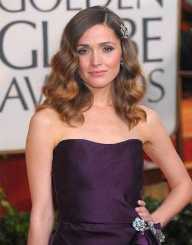 Rose Byrne was born on 24th July 1979, to Robin and Jane Byrne. She was born in Sydney, New South Wales, in Australia. She was born in the suburb of Balmain. Her father is a statistician and market researcher, her mother a primary school administrator. Rose Byrne is the youngest of four children, with an older brother and two older sisters.

She grew up in Balmain. She studied at Hunters Hill High School, and then went on to Bradfield College. Rose Byrne joined the Australian Theatre for Young People at age eight to begin her acting lessons. Some years later, she joined the Atlantic Theater Company to further her acting studies.

Rose Byrne’sdebut film role was in Dallas Doll when she was just 13. It would be five years before she acted in her next movie, which was Two Hands, also starring Heath Ledger. Rose Byrne started being cast for roles in popular Australian television shows around the same time, including, Heartbreak High and Echo Point. As her career progressed, Rose Byrne was cast in several movies and played opposite stars such as Peter O’Toole, Melanie Griffith, and Josh Hartnett.

In 2007, she landed a role in the television series Damages, which aired until 2012. Her movie roles continued, co-starring opposite Nicolas Cage in Knowing (2009), and Get Him to the Greek(2010) which starred Russell Brand. In 2011, Rose Byrne starred in the movie, Bridesmaids, which has gone on to become a cult comedy film.

Rose Byrne has been nominated for 35 awards over the years and has won 13 of them. Her awards include:

Rose Byrne was initially in a long-term relationship with Brendan Cowell, an Australian actor, director, and writer. He followed her to New York when she moved due to the success of her role in Damages, but the couple parted in early 2010.

She began dating Bobby Cannavale, a fellow actor, in 2012. They have two children, Rocco and Rafa. The boys were born in 2016 and 2017 respectively.