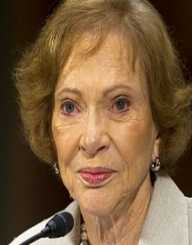 Born Eleanor Rosalynn Smith on August 18, 1927, in Plains, Georgia, United States of America, former American first lady Rosalynn Carter was eldest among the four children of her parents. Her father Wilburn Edgar Smith worked as an automobile technician as well as a peasant. Her mother Allie Murray Smith, mainly a homemaker, had to take up various kinds of odd jobs including the job of a dressmaker after the demise of Rosalynn’s father in 1940.

A student of scholarly abilities, Rosalynn graduated from the Plains High School as the second topper and attended Georgia Southwestern College. However, she had to drop out of the college midway due to financial constraints and family obligations.

Rosalynn began to date Jimmy Carter, older brother of her best friend, since her high school days. At that time, Jimmy Carter was undergoing training at the United States Naval Academy at Annapolis. Rosalynn fell head over heels for Carter after she saw a picture of him wearing the Naval Academy Uniform. After turning down the first marriage proposal by Carter in December 1945, Rosalynn finally relented and agreed to marry Carter, when he again proposed to marry her two months later. Their marriage was solemnized at the Plains Methodist Church on July 7, 1946.

Rosalynn and Carter began their married life in Norfolk, Virginia, one of the earlier postings of Carter in his naval career. For the next seven years, Rosalynn shadowed her husband along the length and breadth of the United States as Carter was sent to different places on numerous assignments in his naval career. During this period, the couple was blessed with their first three sons John, James, and Jeffrey born in 1947, 1950 and 1952 respectively. Rosalynn split her time between raising her three sons and resuming her academic career through home study programs in literature and art.

The Carter couple moved back to Plains, Georgia after the death of Rosalynn’s father-in-law and started looking after the family peanut farming and warehouse business, Rosalynn mainly taking the responsibility of the bookkeeping aspects of the company.

In 1962, Jimmy Carter was elected to the Georgia State Senate, and the mantle of looking after the business interest of the Carter family fell mostly on Rosalynn Carter's shoulders. Carter subsequently won another two consecutive terms to the Georgia Senate, and Rosalynn doubled up as his assistant handling his political correspondence with natural elan. In 1970, when Jimmy Carter was elected as the Governor of the State of Georgia, Rosalynn was seen aggressively campaigning for her husband, fearlessly giving short, impromptu lectures, an activity she was afraid of earlier. Her strong future interest in mental health issues emanated from the exchanges she had with the voters during this campaign.

Eighteen months before the 1976 Presidential election, Rosalynn Carter hit the campaign trail after her husband announced his candidature for the Presidency. Traveling extensively, she covered 42 states in her bid to woo the voters and in an unprecedented move so far in the American Presidential election campaign, she had even declared her manifesto as the future First Lady of the USA.

Jimmy Carter was eventually sworn in as the 39th President of USA in 1977 with Rosalynn assuming the role of the First Lady. Continuing with her earlier position of mental health ambassador during her tenure as the First Lady of Georgia, she expanded and intensified her involvement in the social security issue areas as well as several other humanitarian activities. Standing miles apart from the earlier traditional roles of the First Lady’s of America, she took an active interest in the political affairs of the country. She regularly attended the cabinet meetings to make her well-informed about the latest development concerning her country and even advised her husband on both the internal and external affairs of the country.

Rosalynn Carter's relentless work towards the mental health issues catapulted her to the position of honorary chair on the Active Honorary Chair President's Commission on Mental Health. The Mental Health Systems Bill was introduced to the Congress in May 1979, and the same was passed in September 1980 after she testified before a Senate committee regarding the bill on May 15, 1979. She was the second First Lady to do so after Eleanor Roosevelt.

Rosalynn Carter authored several books after the exit from the White House including a book titled ‘First Lady from Plains’, which was admired profusely for giving an insight about the work ethics of the 39th President of America. She was awarded the Presidential Medal of Freedom, the highest civil honour of the country, among many others for her dedicated work towards the causes.