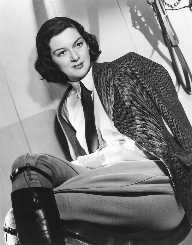 Rosalind Russell was an American stage and screen actress whose career spanned from the 1930s to the 1970s. She is best known today for her comedic roles in His Girl Friday and Auntie Mame, but she also starred in dramatic and character roles as well. She received a total of five Golden Globes, a special Oscar, and two Tony Awards.

Rosalind Russell was born Catherine Rosalind Russell in Waterbury, Connecticut, on June 4, 1907. She was one of seven children. Her parents were James Edward Russell, a lawyer, and Clara A. Russell. The family was a conservative Irish-Catholic one. In fact, when Russell left to study at Marymount College in Tarrytown, New York, she led her family to believe she was becoming a teacher, not an actress. Eventually, she ended up at the American Academy of Dramatic Arts in New York City where she could hone her craft out in the open.

Rosalind Russell began work as a fashion model while working different Broadway shows. She moved on to stock companies in New England before attempting a career in opera. Opera was not her strong suit, and she moved on. Then, in the 1930s, she moved to Los Angeles.

This move would change her life. She signed on with Universal, but their relationship was rocky. Shaken by her experience, Russell tried again with a new contract at MGM. Her first role in Evelyn Prentice (1934), though minor, earned her actual notice.

Several films later, Russell was famous. At the same time, she was unhappy with the roles she’d been cast in. She had wanted to be a comedic actress, but she played the proper lady in straight characters. Eventually, she would get her wish in The Women (1939). The film did well at the box office, and her attempt at comedy in this funny movie was well-received.

The following year, Rosalind Russell found out in a newspaper that she was cast as ace reporter Hildy Johnson in the comedy His Girl Friday (1940) opposite Cary Grant as her ex-husband and editor. This was after a long list of other well-known actresses turned down the part. She took on this quick-witted character and made it her own.

Over the years, she starred in a variety of films, from comedies Take a Letter, Darling (1942) and dramas Mourning Becomes Electra (1947), to mysteries The Velvet Touch (1948).

In the 1950s, she returned to Broadway, enjoying success with Wonderful Town (1953) and Auntie Mame (1957), both of which earned her Tony Awards. The following year, Auntie Mame (1958), a movie version of the Broadway musical, was a box office hit.

Another role she is well-known for is the lead in Gypsy (1962). Later on, in the 1960s, Russell began turning down roles, due to her health issues involving rheumatoid arthritis.

Rosalind Russell married her only husband, Frederick Brisson, in 1941. This occurred after fellow actor Cary Grant acted as a go-between for him. They were married until her death in 1976. They had one child, Carl Lance Brisson.