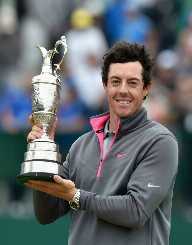 The youngest PGA Tour playoff winner to date, golfer Rory McIlroy was born on May 4, 1989, in Holywood, County Down, Northern Ireland, United Kingdom. Born to Gerry and Rosie McIlroy, Rory is the only child of his parents. He studied at the Sullivan Upper School after having received his elementary education at St. Patrick's Primary School. Rory left school at the age of 16 to fully concentrate on playing golf.

Rory McIlroy was introduced to golf as a toddler by his father, an excellent golfer himself and the talent of his son was immediately visible when he started hitting 40-yard drives with specially sized clubs right from the age of 2. After noticing his extraordinary golfing skills, his parents worked hard, engaging themselves in multiple jobs and did extra shifts to ensure unhindered progress of his training.

At the age of 9, Rory McIlroy achieved his record of the first hole in one. At the age of 7, he was enrolled as a member of the Holywood Golf Club of Northern Ireland, thus becoming the youngest ever member of the club. He participated in the 1998 Dorai Junior Under-10 World Golf Championship held at Miami, Florida and recorded his first significant international victory.


CAREER AS AN AMATEUR GOLFER

Rory McIlroy's amateur golfing career began on a triumphant note upon winning the Junior Under-10 World Golf Championship. He won the 2002 Ulster Boys Championship. He earned a place in Europe's winning 2004 Junior Ryder Cup team at age 15. He continued his winning spree at the boys, youth and amateur levels in Ireland and Britain including winning both the 2005 West of Ireland Championship and the Irish Close Championship.

In 2006, Rory McIlroy successfully defended both of these titles. He became victorious in the European Amateur Championship held at the Biella Golf Club, near Milan, Italy in August 2006. He was invited to take part in the 2007 British Open, one of the four major tournaments in the world and won the silver medal for his performance as a leading amateur. He turned pro in 2007 after ascending to the number one position in the World Amateur Golf Ranking at the age of 17.

Upon turning pro on September 18, 2007, Rory McIlroy secured his 2008 European Tour card by earning enough prize money in his first year of professional golfing thus becoming the youngest and fastest golfer ever to achieve such a feat. He finished the 2008 season with six Top-10 placements and attained the ranking of 50 in the world golf ranking after completing second in the UBS Hong Kong Open in November 2008, thus becoming the youngest player to rank among the Top 50 Golfers of the World.

Rory McIlroy participated in the 2009 Masters, having earned an invitation based on his exploits on the golfing circuit. In his first Masters Tournament appearance, Rory finished the tournament tied for 20th place, having achieved the 3rd highest driving distance behind Dustin Johnson and Andrés Romero. He then appeared at the Players Championship and another event on the PGA tour but remained mostly unsuccessful. Returning to Europe, he recorded two Top-25 finishes before participating in his first U.S. Open. He came fifth at the BMW PGA Championship and finished 12th at the European Open.

2009 U.S. Open was Rory McIlroy's second major professional tournament. He finished the event tied at the 10th spot, his first Top-10 finish in a major. He participated at the BMW International Open, immediately after the U.S. Open and secured a 15th place finish. At the 2009 PGA Championship, he finished at T-3. He came second on the Race to Dubai, the last tournament of the 2009 season and entered the Top-10 ranking of the world for the first time. He finished the 2009 calendar year ranked number 9 in the world.

Rory started the 2010 season with a 3rd place finish at the Abu Dhabi Golf Championship. However, he could not defend his Dubai Desert Classic Championship title and had to be content with a fifth-place finish. After having turned up for the 2010 WGC-Accenture Match Play Championship and the 2010 Honda Classic with little success, Rory recorded his first PGA tour win shooting 62 in the final round of the Quail Hollow Championship. It became a new course record, and Rory became the first PGA tour winner under the age of 21 since Tiger Woods to have achieved the feat before his 21st birthday.

In 2011, the season started in a disastrous note for Rory. He was in a leading position after the first round of the Masters Tournament in Augusta, Georgia on the first day of the four-day tournament. After the third day, he was still in the lead. However, on the fourth and final day, his score was the lowest ever by any professional golfer in the history of the tournament, who was leading after completion of the third round. He was unable to make the cut for his title defense at Quail Hollow that year.

Undeterred and more determined Rory McIlroy made a stunning revival of his fortunes when he went on to win his first major championship by becoming victorious at the 2011 U.S. Open held at Congressional in Bethesda, Maryland. It was a mesmerizing performance delivered by him as his level of play throughout the tournament was unparalleled which reflected on his large margin of victory over his nearest rival Jason Day. His 72 hole aggregate score of 268 made a new U.S. open record beating the previous record of 272 jointly held by Jack Nicklaus, Lee Janzen, Tiger Woods and Jim Furyk. His title win at the 2012 PGA Championship at Kiawah Island was his second major title on the professional circuit. He became the youngest player to win a PGA tour playoff.

Rory McIlroy developed a romantic relationship with Caroline Wozniacki, tennis pro from Denmark in 2011. They announced their engagement on the New Year’s Eve of 2013. However, they broke off months before their proposed marriage which was to be solemnized in November 2014.