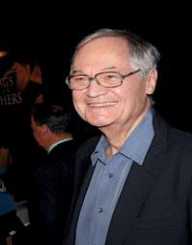 Roger Corman was born 5th April 1926, to William and Anne Corman. He was born in Detroit, Michigan, in the United States. Roger Corman has a younger brother, Eugene. Roger Corman's father was an engineer, a subject that Corman himself studied.

He studied at Beverly Hills High School, and after graduation, he enrolled into Stanford University. His area of study was industrial engineering, but Roger Corman soon came to the realization that he didn’t want to be an engineer.

Roger Corman signed up for the V-12 Navy College Training Program and went on to serve in the U.S. Navy between 1944 and 1946. After his naval service, Roger Corman returned to Stanford and graduated in 1947 with his Bachelor of Science in Industrial Engineering.

Roger Corman got himself a job in Los Angeles in the field of engineering, but after four days he quit, knowing it just wasn’t for him.

His brother, Eugene (known as Gene) was working in the movie industry as an agent, and Roger Corman decided that making movies was the career he wanted.

Roger Corman’s first job was in the mail room at 20th Century Fox. Over time he worked his way up to the position of story reader. When he didn’t receive any credit for his first collaboration, he left the studio.

At the time, through the GI Bill, Roger Corman went to Oxford University and studied English Literature, as well as living in Paris.

When he returned to the U.S., he decided to give the movie industry another go. He started again at the bottom of the ladder. He did several jobs, including working as a stagehand in a television studio and worked at Fox again as a messenger.

Roger Corman worked for Dick Hyland, a literary agent, as his assistant. He wrote a script and then sold it to Allied Artists for $2,000. Using the money from the sale of his script, and money he raised through friends and colleagues, Corman accumulated $12,000.

hused the money to produce his first feature film, in the science fiction genre, called TheMonster from the Ocean Floor in 1954. The movie made enough money for Roger Corman to be able to do another project. His next movie was The Fast and The Furious, in 1954.

Roger Corman sold his movie to the American Releasing Company (ARC) which was an independent movie production and distribution company. ARC changed their name to American International Pictures (AIP).

Corman got in on the ground floor with AIP as they were a new company. The business arrangement was good for both parties, with Corman working with AIP for many years as producer or director on many movies.

At the same time, Corman was also working for Allied Artists, producing movies for them, once again, over many years.

In 1959, in conjunction with his brother, Corman founded Filmgroup. The company produced and released low-budget black & white movies, particularly for the “double feature” market of drive-ins and theaters.

Corman did his first color film for AIP. It was filmed and released in 1960 and was called House of Usher, by Edgar Allan Poe. The film was a huge commercial success, receiving critical acclaim as well.

Corman was working on multiple scripts with Filmgroup, but AIP wanted a follow-up to House of Usher. The next movie was also from Poe, called, The Pit and the Pendulum which was released in 1961.

Roger Corman had decided that even though he was happy with the work he had done previously, he would have more funds available if he went mainstream. He soon realized though, that he didn’t fit into the mainstream. The film studios put forward ideas that were too mundane for Roger Corman, and he produced ideas that the studios thought too way-out.

Corman had a year off from Columbia and went back to AIP to make a biker movie. He didn’t finish his commitments to the film studios but instead went back to his independent roots.

He financed movies through his company, and he continued to work with AIP. Corman decided he didn’t want to direct movies but concentrate on producing.

In 1970, he established New World Pictures, which would be an independent production and distribution studio. The first 11 movies were all successes.

Roger Corman sold the successful studio in 1983, staying on as a consultant for the next two years.

He then set up another production company called Millennium. He changed the name to New Horizons in 1984 as people struggled with the previous name.

In 1985, the consortium who had purchased his New World Pictures company sued Roger Corman, and he sued them at the same time. The parties ended up settling out of court.

Corman’s next project was to establish Concorde Pictures, a distribution “co-op” for producers. He merged with Cinema Group who was a production company for low-budget movies.

In 1995, Corman produced Roger Corman Presents, a series of 13 movies for Showtime. With the success of the first season, he did 11 more movies for the second season.

Leading into the early 2000s, Corman continued to produce “creature” movies, most of which were taken up by the Syfy channel on cable television.

Roger Corman had begun to make his movies overseas, and by 2006 he said that 60% of his movies were made overseas as huge subsidies were offered by foreign governments to entice independent producers.

In 1998, Corman released his autobiography. It was called, How I Made a Hundred Movies in Hollywood and Never Lost a Dime.

Not only did he direct and produce, but he also mentored many who would become successful filmmakers themselves. Ron Howard, Francis Ford Coppola, Martin Scorsese and Joe Dante were just a few of the many that Corman mentored. Six of those mentored by Corman, including Howard, Coppola, and Scorsese, have won Academy Awards for their work.

Roger Corman was also responsible for launching the career of some of the world’s biggest movie stars, such as Charles Bronson, Jack Nicholson, Peter Fonda, David Carradine, Sandra Bullock, and Robert De Niro.

Among his awards and honors, Roger Corman has achieved the following:

1998:   The first Producer’s Award ever given at the Cannes Film Festival

2006:   David O. Selznick Award by the Producers Guild of America