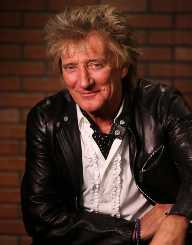 Rod Stewart is a British rock singer who is known for his raspy voice and for a string of hits which include ‘Maggie May and DaYa Think I’m Sexy.’

Rod Stewart was born Roderick David Stewart in London, England on 10 January 1945. His father Robert was Scottish and his mother Elsie was English, and the pair had five children together with Rod being the youngest. His father worked as a builder, and the family had a comfortable income without being middle class. The family began living above and running a newsagency when Robert Stewart retired from the building work. Stewart enjoyed model trains and was also a keen footballer. He played at centre half and represented Middlesex Schoolboys.

After leaving school, Stewart attempted to become a professional footballer and attended trials for Brentford Football Club but did not receive a contract. His early musical influences included Al Jolson and Little Richard. Eddie Cochran’s ‘C’mon Everybody’ was the first record ever bought by Stewart and at age 15 he joined a band with school friends named the Kool Kats. Stewart had a string of jobs having left school, working as a newspaper delivery boy, a grave digger and a silk screen printer.

Rod Stewart attended Highgate Primary School where he failed his 11 plus examination. He then attended the William Grimshaw Modern Secondary School but left at the age of fifteen.

Rod Stewart's first professional role in music came as the harmonica player in the Dimensions who backed singer Jimmy Powell. In 1964 Stewart joined the All Stars, again as a harmonica player, and eventually gained some stage time as a singer. Later that year Stewart released his first single. ‘Good Morning Little Schoolgirl’ as a solo artist but it failed to reach the charts. Stewart appeared on a number of TV programmes, often with the moniker ‘Rod the Mod.’

Stewart went through a series of bands in the late sixties before joining the Jeff Beck Group as a singer. The group failed to gain any traction in Britain or Europe, but a 1968 tour of America brought both critical and commercial success. They released the album ‘Truth," and it debuted at number 15 in the U.S charts, this was Stewart’s first time to reach the charts. Stewart left the group in 1969 after guitarist Ronnie Woods quit. Just before the two left the band released a second album, ‘Beck-Ola,’ which brought Stewart his first UK chart entry albeit at number 39.

Rod Stewart followed Woods to the band ‘Faces’ which developed greater live success than chart success. Stewart also released his first solo album ‘An Old Raincoat Won’t Ever Let You Down’ but it failed to chart everywhere but Australia. 1971 finally saw Stewart achieve success when ‘Maggie May’ a B Side single reached number one in both the U.S and U.K. The album ‘Every Picture Tells a Story,’ which contained the song ‘Maggie May’ also reached number one. Faces also began to achieve some chart success with the album ‘A Nod is as Good as a Wink to a Blind Horse,’ reaching the top ten in America and Britain.

Tensions grew in the band as Stewart’s solo career started to overshadow the band as he released a string of top ten hits. The band achieved one more number one album, ‘Ooh La La’ before breaking up in 1975. The period after the break up saw Stewart reach the height of his fame. The decade from 1976 to 1986 saw Stewart release eight top ten albums and four number one singles. The latter part of the 1980s was less successful for Stewart, but he came back in the 1990s reaching number two in America and Britain with the album ‘Vagabond Heat’ in 1991. In 1993 Stewart again reached number one in America, along with Brian Adams and Sting, with the song ‘All For Love’.

In 1995 Rod Stewart announced he was giving up songwriting and from then on only performed other people’s writing. He released five albums of classic American songs, ‘The Great American Songbooks.’ The first four of these albums achieved platinum status in the U.S, and U.K. 2013 saw Stewart release an album featuring his work for the first time in nearly twenty years. The album ‘Time’ reached number one in the UK. 2015 brought the release of another Stewart album ‘Another Country,’ and it achieved platinum status in the U.K.

Rod Stewart has eight children. The first, Sarah Streeter, was born when Stewart was just eighteen and she was given up for adoption. Stewart had further two children, Sean and Kimberley, with his first wife Alana Hamilton, whom he married in 1979. The pair divorced in 1984. Stewart fathered his fourth child, Ruby, with model Kelly Emberg in 1987. Stewart married for the second time in 1990. He and model Rachel Hunter had two kids together, Renée and Liam, but the pair divorced in 2006. Stewart married his current wife Penney Lancaster in 2007, and they have two children, Alastair and Aiden.

In 2000 Rod Stewart underwent surgery for thyroid cancer and had to relearn how to sing. He is also colour blind.

Rod Stewart is a huge Celtic Football Club supporter and also supports the Scottish national football team. He is model railroad enthusiast and is also a collector of motor vehicles.