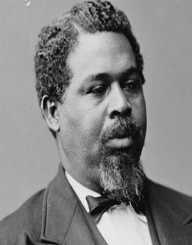 Robert Smalls was an American politician of African origin. He is remembered for his heroic action of taking charge of a Confederate supply ship transporting slaves on 13th May 1862.

His act of bravery brought Robert a lot of fame all over the world. Through Small's persuasion, and good example, President Abraham Lincoln accepted to admit African-Americans into the Army.

Robert Smalls was born on 5th April 1839. His mother was Lydia Polite, and his father is believed to be Henry McKee, the son of a man who had taken Small's mother as his slave.

Compared to other blacks Smalls enjoyed more acceptances, and on occasions when there was a curfew restraining the blacks, Smalls would hang out with his white friends.

Robert Smalls was an exemption from work, worried his mother since she wanted her son to witness the plight of her fellow slaves in the farming fields. She requested Smalls to be treated like any other slave.

Her mother's request was honored, and Smalls was sent to Charleston at the age of 12, to work as a laborer. He first worked in a hotel before working as lamplighter on Charleston.

Robert Smalls was hired as a deckhand during the Civil War by Confederate Supply Ship tasked with cotton supplies in forts in Charleston Harbor.

Small later worked as a sailmaker before finding his way to the top to become a wheelman; position slaves were not allowed. His knowledge of Charleston, however, made him get the position.

In the wee hours of 13th May 1862, Robert Smalls and other 16 slaves put their plan of escaping to action. Smalls wore the captain's uniform and a hat resembling that of the captain.

He successfully guided the ship past five checkpoints giving the correct signal at every point. They managed to go past the gun range before the alarm was raised.

It was a dangerous action since the ship would have been blown if the plan failed. They later surrendered to the USS Onward.

His actions proved to be a turn over for the back Americans; they were allowed to join the Union Military.

Robert Smalls' act of escape led him to join the military. He was appointed the Union Navy Captains and Spokesperson of the Planter and USS Keokuk. The task of his crew was to conduct various missions in Charleston.

Smalls went on to take up the position as a lieutenant-colonel of the Third Regiment of the State Militia of South Carolina. He was later promoted to the rank of major general and held the position until 1877.

Robert Smalls was a known Republican. His heroic escape and humanitarian success opened doors for his political ambitions. He first became a delegate of the State's Constitutional Convention in 1868, before being elected to serve in both the house of Representation and State Senate.

President Benjamin Harrison appointed Smalls in 1890 to be a collector of Port of Beaufort a position he held until the year 1913.

Together with other black politicians, Smalls strongly opposed an attempt by the Democrats to exclude African Americans from politics.

Robert Smalls married Hanna Jones in 1858 and had three children together. Hanna had two children before they met. Smalls and his family were members of the Baptist Church.

Hanna Smalls met her death on 28th July 1883. Small went ahead to marry Annie. E. Wigg, seven years later who had one son with Smalls.

Robert Smalls succumbed to his death in 1975 after his battle with malaria and diabetes. He was laid to rest in a family land in Tabernacle Baptist Church.