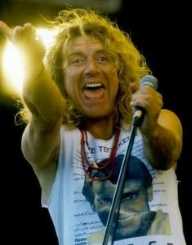 Voted the #1 Lead Singer of all time, by the Rolling Stones magazine in 2011, Robert Plant is a legend in the rock genre. The lead vocalist of the legendary band Led Zeppelin, Plant has inspired an entire generation of artists. In his three decades-long career Plant has heavily influenced the heavy metal and rock music, and achieved greater success than any other rock singer can claim!

Robert Plant was born on August 20, 1948, in West Bromwich, England. His father Robert C. Plant was a civil engineer who served in the World War II.

Plant was inspired by music from an early age, and Elvis Presley had a huge influence on him. School did not appeal to him much, and so he dropped out of King Edward VI grammar school. At the age of 16, he left home to follow his dream of making music.

Robert Plant started early with blues music and struggled to make a mark initially. But after he was discovered by Jimmy Page, he went on to become one of the greatest artists of the 20thcentury.

Early in his career, Robert Plant started with the blues genre. He started the Band of Joy with two other members, but they all moved in different directions. Plant fooled around with some R&B music in the meantime. He wrote lyrics for a few songs, and had moderate success, till he was discovered by Jimmy Page, who was looking to form a band of his own.

Plant recommended the extremely talented John Bonham on drums. Along with John Paul Jones, the four members formed a band called the New Yardbirds.  Success followed soon, and they changed the band name to Led Zeppelin.

The first album Led Zeppelin I was a moderate success, however, the band started receiving opening gigs for other popular bands, and Plant got the exposure he needed.

Led Zeppelin II, the second album from the band, met critical success. Their song “Whole Lotta Love” opened at the #4 spot, and eventually, got to the top. Plant wrote the lyrics for this song.

Several other major works followed, and with the fourth unnamed album, came the epic song Stairway to Heaven. It is the most requested song in rock history. Plant gave his vocals to the 1973 album Houses of Holy, and the band followed it with another successful album Physical Graffiti in 1975. The song Kashmir was another epic Plant wrote and sang that year.

3. Hiatus due to tragedy

Robert Plant’s career came to a halt in 1977, when he lost his first son Karac due to a viral infection in his stomach. This loss affected him so much that he decided to cancel all gigs, and stopped performing for about a year and a half. In that period, Led Zeppelin did not produce any new albums.

Things got better after Plant recovered from his loss, and they performed many successful live concerts.

In 1980, drummer Bonham died in his sleep due to an overdose of alcohol. Plant and other members decided to disband Led Zeppelin.

Robert Plant started his solo career with the album Pictures at Eleven in 1982. He kept doing concerts covering Led Zeppelin songs and also collaborated with many artists over the remaining of his career.

In 2007, Robert Plant collaborated with Alison Krauss for the rock album Raising Sands. The album was a huge hit and won 5 Grammy Awards.

Robert Plant has received many awards and honours in his career. Some notable mentions are the 1998 Grammy award for Best Hard rock Performance. He also won an award for Mighty Rearranger (2005).

Robert Plant was honoured as a Commander of the Order of British Empire for his contributions to music. He has also been voted the #1 Lead Singer, the greatest rock singer and more multiple times.

Robert Plant married Maureen Wilson in 1969 when his career was on the rise. The couple produced three children – Carmen Jane, Karac, and Logan. His first son Karac died due to a stomach infection, and this affected Plant deeply.