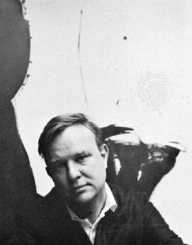 Robert Motherwell a prominent American editor, Abstract painter, and printmaker was born in 1915. He pursued art and painting as his career with Meyer Schapiro as his mentor. Initially, Motherwell studied philosophy to please his father. He was a man of high intelligence, and this helped him to succeed as an artist.

He took part in the creation of Abstract Expressionism. This is a popularized theme which broke the record of being among conventional arts. During, his career at Motherwell held exhibitions in places like the USA and Europe. He also lectured in Universities, worked as an editor and also created art.

Robert Motherwell was born on January 24th, 1915. His place of birth was in Aberdeen, Washington, United States. He was the first born to Robert Burns Motherwell the II and Margaret Hogan Motherwell. A few years later after he was born, his family shifted to San Francisco. At San Francisco, his father worked at Wells Fargo Bank as the president. Motherwell had an asthmatic condition as a child.

He was then reared at the pacific cost and studied in California. This marked his love for bright colors and broad space which nurtured his artistic creativities. He later came up with abstract paintings like ultramarine blue of the sky and ochre yellow of Californian hills. At the age of 20, His father took him for a tour along with his sister. They visited Paris, Amalfi, Italy, Switzerl and, Germany, The Netherlands then to London; and finally Motherwell in Scotland.

Robert Motherwell began his painting studies at San Francisco at the California School of Fine Arts. This was between the years 1932 and 1937. During this time he also studied at Stanford University where he attained his B.A in Philosophy. Among the skills he attained at Stanford include symbolism in art and modernism. The literature that was most influential to him were the likes of Edgar Allan Poe, Octavio Paz, James Joyce, and Mallarmé. He later went to Harvard University for his Ph.D. in Philosophy. His father pressured him to take a secure career other than painting which led him to study philosophy.

While studying at Harvard Robert Motherwell researched the findings of Eugène Delacroix in Paris. He was studying under David Wite Prall and Arthur Oncken Lovejoy. It was in Paris that he met Arthur Berger, an American Composer. Berger advised Motherwell to further his studies at Columbia University.

In 1940 he took heed to composer’s advice and joined Columbia University. He studied Art History under Meyer Schapiro. He traveled with painter Roberto Matta in 1941. It was then that he decided to focus his career in painting.

During his tour to Mexico with painter Roberto Matta, Robert Motherwell made his first sketches. These sketches later turned out to be major works, the likes of Little Spanish Prison and Dead and Alive. He later met with painter Wolfgang Paalen who influenced his change in painting style to Abstract Expressionism.

In 1942 he appeared in the exhibit of First Papers of Surrealism held at New York. He was among the editors for VVV and DYN magazines between 1942 and 1944. In 1944 he worked at Modern Art Series of Books as the editor. He took part in Fourteen Americans exhibition in New York. This was at the Museum of Modern Art.

He also did other solo exhibitions in other countries, and 1988 worked on the edition of Ulysses. This was a book written by James Joyce. He worked along with a publisher from Arion Press, Andrew Hoyem.

Robert Motherwell wedded Maria Emilia Ferreira y Moyeros in 1941. She was a writer and an aspiring actress. Later in 1949, the couple separated. He then married Betty Little in 1950. The two had two daughters but later divorced. He tied the knot with Helen Frankenthaler 1958 which lasted till 1971 upon which he married Renate Pensold.

Robert Motherwell took his last breath on July 16th, 1991. This took place at Provincetown, Massachusetts. He died at the age of 76. He left an estimate of 25 million dollars and over a thousand works of Art.