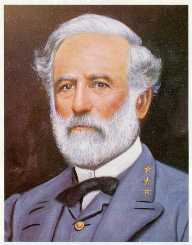 American Confederate general Robert E. Lee was born on the 19 January 1807 at Stratford Hall Plantation in Virginia. His father was the Revolutionary War hero Henry Lee (b.1756-d.1818) known as Light-Horse Harry. His mother was Anne Hill Carter (b.17773-d.1829). One his father’s side, Lee was descended from the English immigrant Richard Lee who came from Shropshire, England.

Robert E. Lee’s father was imprisoned for debt in 1809, and afterward, the family moved to Alexandria, Virginia. In 1812, Henry Lee was injured in a political riot in Baltimore, and after a period of recuperation in the West Indies, he was returning home in 1818 when he died.

Robert E. Lee was educated at the Alexandria Academy and after graduation enrolled at West Point Military Academy (1824-1829)

After graduating from West, Point Robert E. Lee served as an officer in the Engineers Corps working on the construction of coastal defenses

The Mexican War saw Robert E. Lee as a member of General Winfield Scott’s staff during which time he won three distinguished medal awards for bravery and attained the rank of colonel. He refused Abraham Lincoln’s request to command the Union army, resigned and went back to Virginia. When Virginia seceded on the 18 April 1861, Lee was asked to head the Confederate forces, and he agreed to do so. In May 1962 he was put in charge of the Army of Northern Virginia. At the Seven Days Battle he pushed back the Union forces, and in August of 1862, he had another win at Second Manassas.

The battle of Antietam when Robert E. Lee tried to cross the Potomac resulted in over 12000 Confederate soldiers being killed, wounded or captured. In early July 1863, the Confederate forces again suffered a large number of casualties at Gettysburg. The Battle of Gettysburg lasted for three days and halted Lee’s push North, setting back the Confederate cause which proved a turning point in the Civil War. By mid-1865 the Union forces under Ulysses S Grant had destroyed Richmond and Petersburg. Lee and his forces abandoned the Confederate capital Richmond on the 2 April and on the 9 April 1865, Lee surrendered to Grant at Appomattox, Virginia.

After the American Civil War, Robert E. Lee returned home and was appointed President of Washington College, Virginia. He held this position until he died on 12 October 1870 in Lexington, Virginia.