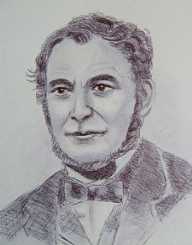 Robert Wilhelm Eberhard Bunsen was born on March 30th, in 1811. He was a well-known German chemist. He is to be credited for researching emission spectra relating to heated elements. In 1860 and 1861 he discovered cesium and rubidium respectively. This is a discovery that he made with the help of Gustav Kirchhoff, a physicist. With the help of Peter Desaga, Bunsen originated the Bunsen burner.

Robert Bunsen was born on March 30th, 1811 in Göttingen, Germany. He was the youngest son of Christian Bunsen, his father. His father worked at the University of Göttingen as a librarian. Besides, he was also a professor teaching contemporary philology. Bunsen went for his early studies at Holzminden. Later, he took chemistry classes which gave him the opportunity of meeting Friedrich Stromeyer who was also a chemistry student. While studying mathematics, he crossed paths with Carl Friedrich Gauss.

In 1831, Bunsen earned his Ph.D. He later spent the following two years touring Germany, France and later to Austria. During this trip, he met renowned scientists such as Eilhard Mitscherlich, Friedlieb Runge, and Justus von Liebig.

While residing in Göttingen in 1833, Bunsen took a job as a lecturer. This gave him an opportunity to carry out his early experiments. Part of these experiments featured the (in) solubility of metal salts. Around this time, he discovered an antidote that would work against arsenic poisoning. This was the use of iron oxide hydrate.

Three years later, Bunsen took the post of Friedrich Wöhler where he taught at Polytechnic School of Kassel. He tutored here for three years before being an associate professor at the University of Marburg. In 1841, he was promoted to work as a full professor. While at Marburg, he focused his research on cacodyl derivatives. This earned him high acclaim because cacodyl was complicated to work with hence making him famous. The toxic chemicals that he worked with affected him. For instance, he lost his right eyesight after cacodyls exploded on him. Also, there is a time that he almost lost his life due to arsenic poisoning.

After coming up with the Bunsen cell in 1841, after a decade, in 1851, Robert Bunsen joined the University of Breslau as a professor. He taught here for a short period as he left after three semesters. Later, in 1852, he succeeded Leopold Gmelin to the post he served at the University of Heidelberg. In 1855, Bunsen partnered with Gustav Kirchhoff to study spectrum analysis. Around this time, he and his lab assistant named Peter Desaga had developed an ideal gas burner that they used. This was an improvement from an earlier design, and it was named the ‘Bunsen burner.’

Robert Bunsen was never married in his life. He had his full attention to scientific research and was loved by many.