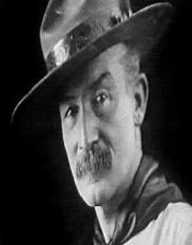 Robert Baden-Powell was born on February 22nd, 1857. He was a famous British army officer. He also authored Scouting for Boys who served as a huge muse for the Scout Movement. Globally, Baden-Powell is recognized as the founder of The Boy Scouts Association and Girl Guides.

Robert Baden-Powell was born on February 22nd, in 1857 in Paddington, London. At the time of his birth, he was given the name Robert Stephenson Smyth Powell. This name had been adopted from his godfather, a civil engineer called Robert Stephenson. He also used his mother’s surname as his third name.

Baden-Powell’s father was a well-known mathematician and a theologian. His mother was his father’s third wife. She was called Henrietta Grace Baden Powel. Baden-Powell was the eighth born son in a family of ten children.

When Robert Baden-Powell was aged three, his father passed away. As a result, his mother wanted to distinguish their children from the rest from other wives. For that reason, she adopted Baden-Powell as their surname.

For his early education, he joined Rose Hill School located in Tunbridge Wells. After this, he was offered a scholarship to study at Charterhouse School. This was a prominent public school in town. In school, Baden-Powell was an avid actor and also played violin and piano. He initially introduced himself to scouting skills through cooking games and stalking when he was evading teachers in nearby woods.

Robert Baden-Powell became a member of the 13th Hussars in 1876 while operating in India. He got his entry into the group as a lieutenant. Later, in the 1880s, he sharpened his military scouting skills while working in Natal Province, South Africa. Impressed with his skills, he was further promoted to serve as a Major. After some time, he was posted to offer his services in Malta for three years.

In 1896, Baden-Powell made his return to Africa and was commissioned to serve in the Second Matabele War. Part of the primary missions was to free British South Africa Company employees who had been blocked in Bulawayo, Zimbabwe. He gained numerous ideas to incorporate into his boy scouting skills.

Moreover, he also became friends with Frederick Russell Burnham around this time. Burnham greatly motivated Baden-Powell through his American Old West stories and scoutcraft ideas. It is around this period that Baden-Powell wore the neckerchief and the Stetson campaign hat for the first time.

When Robert Baden-Powell clocked 40, he was conferred with a brevet rank of colonel. This made him the youngest colonel to serve in the British Army. He was to command the 5th Dragoon Guards serving in India. Shortly after, he published Aids to Scouting. This was a small scouting guide based on the lessons he gained from Burnham.

Years later, Robert returned to South Africa before Second Boer War erupted. He joined military campaigns against the Zulus. He subsequently served as the commander during the Siege of Mafeking. In 1900, he rose his military ranks to become a Major General. During this period, he was recognized as a national hero following the successful Siege of Mafeking.

Regardless of the fact that Robert Baden-Powell fought numerous battles while in the army, he is best commemorated for being the founder of Boys Scout and Girl Guide movements. He honed his scouting skills while he was serving in the army.

He was also a Nobel Prize nominee in several occasions, but he never got the chance of winning any. In 1937, he was honored with the Wateler Peace Prize.

In 1912, Robert Baden-Powell wedded Olave St Clair Soames. Olave was only 23 years old while Baden-Powell was 53 years. Together, the pair had three children.

Nearing the end of his life, Baden-Powell spent some time in Kenya. He resided in Nyeri at the time. He passed away on January 8th, 1941.