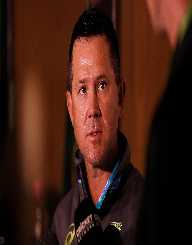 Ricky Ponting was born on December 19, 1974, in Launceston, Australia.

As a teenager, Ricky Ponting was a member of the under-16 Tasmanian cricket team. He practiced with this team often, and in 1994, he made his Test match debut. Throughout the next few years, Ponting’s skills on the field became debated, as in some games he did well and in other games, he couldn’t seem to focus. He later attributed this to problems in his personal life that caused him to be unfocused. However, this didn’t stop him from earning his first Test century in 1997. In 1999, Ricky Ponting also got a taste of victory when his team won the Cricket World Cup.

Ponting’s game improved in the early 2000’s. His team again won the Cricket World Cup in 2003.

In 2004, Ricky Ponting became the captain of the Australia National Cricket Team after the old Test captain, Steve Waugh, retired. The first year of Ponting’s leadership was not great, as he led his team to defeat in the Ashes Series in 2005. However, his skills as a captain improved afterward, and his team had a great season after the Ashes Series. During this season, he earned seven centuries.

After his resignation as test captain, Ricky Ponting continued to play as a test player. He retired from this position in 2012 and retired from cricket as a whole in 2013.

Ricky Ponting not only has a talent for cricket but writing. He has written several memoirs and nonfiction books, mostly about his life as a cricket player. Some of his most famous books are listed below.

Ponting: At The Close of Play

Punter: First Tests of a Champion

All of Ponting’s awards and accomplishments are due to his cricket career. Some of his most impressive awards are listed below.

Wisden Leading Cricketer in the World (2003)

International Cricket Council Test Player of the Year (2006 and 2007)

Ricky Ponting was made a member of the Order of Australia in 2012.

Ricky Ponting was inducted into the Sports Australia Hall of Fame in 2015.

Ricky Ponting married Rianna Cantor in 2002. Together, this couple has three children: Emmy, Fletcher, and Matisse.