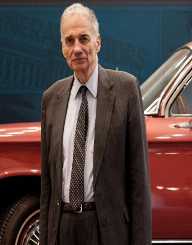 Consumer advocate, author, and lawyer Ralph Nader was born on the 27 February 1934 in Winsted, Connecticut to Lebanese immigrants Nathra Nader and Rose Bouziane.

After a period in the US Army at Fort Dix, in 1959 Ralph Nader started practicing law in Hartford Connecticut. Between 1961 and 1963 he worked at the University of Hartford, lecturing in government and history. The Assistant Secretary of Labor, Daniel Patrick Moynihan appointed Nader as an auto safety consultant in 1964 and 1965; Ralph Nader published Unsafe Any Speed which focused on the trend to favor style over safety in motor car design. He was particularly critical about the Chevrolet Corvair.

Ralph Nader was called to testify before a Senate subcommittee on motor vehicle safety issues in February 1966. The following month, the then president of General Motors, James Roche apologized before a Senate committee for the fact that they had hired a private investigator to spy on Nader. (Nader eventually settled a subsequent harassment lawsuit against General Motors for $425,000 in 1970). On the 9 September 1966, the president signed the National Traffic and Motor Vehicle Safety Act.

Ralph Nader has founded some organizations including the Public Interest Research Group, Public Citizen, Clean Water Action Project, the Project for Corporate Responsibility and the Center for Auto Safety.

Federal consumer protection laws that Ralph Nader has advocated for include safe drinking water, motor vehicle safety laws, environmental protection and safety and consumer product safety. In 1967 he was involved lobbying Congress to pass the Wholesome Meat Act, which involved better regulation of meat processing plants and slaughterhouses. He was also involved in the founding of the Center for Responsive Law; a non-profit body focused on consumer issues. Congress established the Occupational Safety and Health Administration body in late December 1970. Ralph Nader had advocated strongly for this. He then established Public Citizen Inc. in 1971, a consumer lobbying group and in 1983 he set up the US Public Interest Research group.

Throughout the 1970s, Ralph Nader continued his work as an activist. He was involved in the antinuclear movement and formed The Critical Mass Energy Project in 1974 to campaign against nuclear power. He continued with lobbying through Public Citizen, and he advocated for the Freedom of Information Act, Foreign Corrupt Practices Act, Clean Water Act, Consumer Product Safety Act, and the Whistleblower Protection Act.

Ralph Nader has never married and has no children. He has three siblings: Laura, Claire, and Shafeek.

Publications that Ralph Nader has written many books. Some of them include Unsafe at Any Speed (1965), Action for a Change (1973), Whistle-Blowing (1972), Ralph Nader, Joel Seligman, and Mark Green. Taming the Giant Corporation (1977), Menace of Atomic Energy (1977) co-written with John Abbotts, Corporate Power in America (1977) co-authored with Mark Green, Guide to Money (1990), Unstoppable: The Emerging Left-Right Alliance to Dismantle the Corporate State (2014), Return to Sender: Unanswered Letters to the President (2001-2015) and Breaking Through Power: It’s Easier Than We Thank (2016).