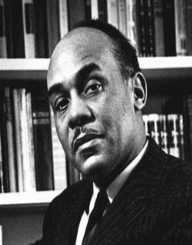 Ralph Waldo Ellison was born on the 1 March 1914 in Oklahoma City to Lewis Ellison and Ida Millsap. He was one of three children born to the couple. Their son Alfred died as an infant and then Lewis Ellison died in 1916 leaving Millsap with two young sons: Ralph and Herbert (b.1916). Ellison Snr. worked in the construction business and died from a work-related accident. Ellison’s father had hoped that one of his sons would grow up to be a poet or writer. As a child, he developed a love of music at a young age and by the age of 8, was playing the cornet.

Ralph Ellison enrolled at the Tuskegee Institute for studying music. The trumpet was his instrument, and although he was enthusiastic about jazz, he studied classical music intending to becoming a composer.

During his summer break in 1936, Ralph Ellison travelled to New York City looking to earn some money to cover some of the expenses for his senior year. He never returned to the Tuskegee Institute. He met the writer Richard Wright and got a job doing writing and research for the New York Federal Writers program, which was part of the Works Progress Administration.

Around this time Ellison started writing short stories and essays for publications such as The New Republic, Saturday Reviews, The Negro Quarterly, and New Masses. When the United States entered World War II, Ellison served as a U.S. Marine as a cook. During this time the idea of writing a novel was forming, and after he returned from the war, he became writing Invisible Man.

Invisible Man (1952) was a critical and popular success and established him as a writer. The novel was on the bestseller list for 16 weeks and won the National Book Award (1953). Ellison went to Rome where he spent two years as a Fellow of the American Academy. He then taught at various universities and colleges in the United States including New York University, the University of Chicago and Yale University. He addressed the Library of Congress in 1964, delivering the Gertrude Clark Whittall Lecture. Between 1966 and 1972, Ellison was the Library’s Honorary Consultant in American Letters.

Ralph Ellison was writing his second work of fiction Juneteenth when he died in 1994. It was published posthumously. The Collected Essays of Ralph Ellison”(1995) were published in 1995 and Flying Home and Other Stories in 1997. The correspondence between the writer Albert Murray and Ellison was published as Trading Twelves in 2002.

In addition to the US National Book Award for Fiction which Ralph Ellison won in 1953, he was acknowledged by receiving two President’s Medals, a French State Medal and an honorary Doctorate from Harvard University. He was a member of the American Academy of Arts and Letters. Between 1970 and 1980, Ellison was the Albert Schweitzer Professor of Humanities at New York University. He was also a recipient of the National Medal of Arts (1985).

Ralph Ellison married Rose Araminta Poindexter in 1938; they divorced in 1943. He then married Fanny Ellison, and they remained married until his death in 1994. Ralph Ellison died of cancer on the 16 April 1994.