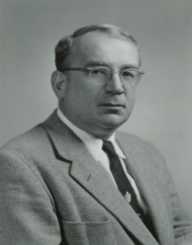 George Gamow (Georgiy Antonovich Gamov) was born on March 4, 1904, in Odessa, Russian Empire. His father was a Russian literature and language teacher in school, and his mother was a geography and history teacher. As a child, he learned to speak French from his mother and had a tutor who taught him German. During his high school years, Gamow also learned to speak English.

After high school, Gamow went to study at the Institute of Physics and Mathematics in Odessa, and in 1923 went to University of Leningrad. He graduated in 1929. After graduating, Gamow began working on the quantum theory in Gottingen and crafted the basis for his doctorate.

From 1928 to 1931, George Gamow worked at the University of Copenhagen and took a short break to work at the Cavendish Laboratory in Cambridge. During this time, he was researching the atomic nucleus and proposed his “liquid drop” model. In 1931, Gamow became the corresponding member of the Academy of Sciences of the USSR. Until 1933, he worked in the Physical Department of the Radium Institute in Leningrad and participated in the designing of Europe’s first cyclotron.

By 1928, George Gamow and Goettingen solved the theory of the alpha decay via tunneling. He created a model that showed the relationship between the half-life of the alpha-decay event process and the energy emission. Gamow worked in several establishments in the Soviet Union, but the political oppression was increasing. In 1931, he was denied permission to attend a conference in Italy. The same year, he married Lyubov Vokhmintseva and spent the next two years trying to leave the Soviet Union.

George Gamow and his wife moved to the United States in 1934, and he began working as a professor at the George Washington University. He also recruited physicist Edward Teller from London, and together they published the Gamow-Teller selection rule for beta decay.

In the late 1930s, Gamow turned his interests more towards astrophysics and cosmology. His primary interest was stellar evolution and the early history of Solar System. In 1945, he published a paper together with Carl Friedrich von Wizsacker on the planetary formation in Solar System. In 1940, Gamow became naturalized United States citizen.

George Gamow was one of the leading scientists in the development of the big bang theory. He assumed that radiation predominated the early universe. He later used his model of the expanding universe to the questions of the creation of chemical elements. He believed that elements might have developed in high temperature and density in the early stage of the universe, but later revised his opinion concluding that elements heavier than lithium were produced in thermonuclear reactions in stars. In 1948, he and Ralph Alpher published the αβγ paper. After 1946, he began working on the description of cosmic nucleosynthesis.

After DNA and RNA were discovered in 1953, George Gamow began working on the problem of how the order of the basis in DNA could control the synthesis of proteins. Gamow suggested the twenty combinations of four DNA bases, which led Crick and Watson to enumerate the 20 amino acids common to proteins. In 1954, Gamow and Watson founded the RNA Tie Club, in which the lead scientists were discussing the problem of the genetic code.

George Gamow worked at the George Washington University until 1954. Afterwards, he became the visiting professor at the University of California, Berkeley and in 1956, began working at the University of Colorado, Boulder. He was one of the founders of the Physical Science Study Committee. In 1956, he and his first wife divorced, and he married Barbara Perkins in 1958.

In 1961, Gamow published his book The Atom and its Nucleus and proposed the periodic system of the chemical elements. For the rest of his career, he continued teaching at the University of Colorado Boulder and wrote several textbooks and books on science. Gamow died of liver failure on August 19, 1968.