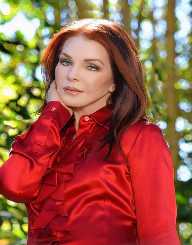 The first wife of Elvis Presley was born Priscilla Ann Wagner on the 24 May 1945 in Brooklyn, New York. Her parents were James Wagner and Anna Lillian Iversen. Priscilla’s father, a US Navy Pilot, was killed in an air crash when she was less than a year old. Her mother remarried in 1948. Her stepfather Paul Beaulieu was also in the air force. Beaulieu raised Priscilla, she became known as Priscilla Beaulieu.  Due to her stepfather’s position in the US Air Force, the family spent time in West Germany. It was in Wiesbaden, West Germany that fourteen-year-old Priscilla first met Elvis Presley.

When Elvis and Priscilla Presley first met in 1959,  he was already an established musician. Elvis was in Germany with the US Army, and a  friend arranged an introduction for Priscilla.  The couple quickly established that they wanted to be together. In March 1960, Elvis had to return to the USA. Priscilla went to see him off at the airport, and there is an iconic photograph of the beautiful young girl in a headscarf waving him off. (Life Magazine)

Once he returned to the USA and re-assumed civilian life, he kept in touch with Priscilla, and she visited him in 1962. He dated others, girls, including Anita Wood. When Wood overheard a conversation where Elvis said he was having difficulty choosing between the two girls, she left him.  By 1963, Priscilla moved to Memphis Tennessee, living with Elvis’s parents. She attended the local Immaculate Conception Cathedral School.

In 1967, Elvis and Priscilla got married in a lavish wedding in Las Vegas, Nevada which produced more iconic photographs. Priscilla gave birth to their daughter Lisa Marie in 1968. The marriage did not last and the couple divorced in 1973. Elvis, a devoted father, continued to be involved in their daughter’s life. Elvis and Priscilla remained friends until his untimely death in 1977. In 1979, Priscilla Presley was appointed the executor of Elvis’s estate, Graceland. She showed her mettle by successfully turning Elvis Presley Enterprises into a highly profitable business. She has also kept guard of Elvis’s image over the years.

Shortly after her divorce from Elvis, Priscilla Presley started a successful high-end clothing store. The business was a success and clients included Cher and Barbra Streisand. It was an early sign of her business acumen.

Priscilla was interested in an acting career and had started lessons before her divorce. She made her acting debut in a television series in the wildly famous soap opera Dalla. She starred as playing the part of Jenna Wade Krebbs for five years, winning a Soap Opera Digest Award in 1984.

Priscilla Presley produced a telemovie in 1988 based on her memoir, Elvis and Me. In the late 1980s  and early 1990s, she appeared in the Naked Gun trilogy films. Priscilla produced a musical play, Elvis and Priscilla. In 2008, she danced in Season 8 on Dancing with the Stars. She also produced the films Breakfast with Einstein and Finding Graceland.

Metro-Goldwyn-Mayer appointed her to their board of directors in 2000.

An enterprising businesswoman, Priscilla Presley started developing fragrances, skincare products, and clothing. Her most significant achievement was turning Graceland into a multimillion dollar tourist attraction, one of the greatest tourist attractions in the USA.

A significant achievement was taking over Elvis Presley Enterprises and turning Graceland into a financial and cultural success, as well as securing her daughter's legacy.  Protecting Elvis’s career and not allowing his name to be exploited and misused is another success story.

Priscilla Presley is a Scientologist.

Priscilla Presley’s partner from 1984 through to 2006 was Italian screenwriter Marco Garibaldi. Their son Navarone was born in 1987.

Her net worth is around $100 million.