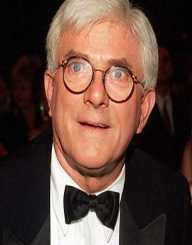 Phil Donahue is a name in the American television industry that needs no introduction. The creator and host of the very famous show “The Phil Donahue”, Phil has brought to light some sensitive topics of the time which no one dared to discuss publically and created a legacy when it comes to the talk shows. He created and hosted the first talk show that allowed the participation of people and holds the record for hosting the longest syndicated talk show in the history of the U.S. television. He has been an inspiration to the present talk shows hosts running on the television.

“If there hadn’t been a Phil, there wouldn’t have been me”- said by the famous Oprah Winfrey in her talk show in Chicago once.

Mr. Donahue’s full name is Phillip John “Phil” Donahue. He was born on December 21, 1935, in Cleveland, Ohio, the United States to Mr. Phillip Donahue and Mrs. Catherine (McClory). His father was a furniture store clerk and mother was a clerk at a shoe store in the city. He spent his childhood there with his family before pursuing higher education. As a child, Phil was an active participant in many activities and games like baseball, dance etc.

Phil was born into a middle class, Irish Catholic family who firmly believed in God and regularly paid visits to the church. Phil was admitted to “Our Lady of Angels Elementary School” located in the West Park neighborhood of the Cleveland.

Phil was an average student in the school and to a surprise of everybody, even after scoring medium grades; he got admission in the University of Notre Dame in South Bend, Indiana. He completed his Bachelors of Business Administration degree from the University in 1957.

Phil started his career in the year 1957 and his first job was a production assistant at the KYW radio-television. After completing his graduation, he became a program director at the WABJ Radio in Adrian, Michigan and later he served as a Stringer for CBS Evening News. He again switched his job and joined WHIO-TV in Dayton, Ohio where he worked as an anchor. During his this job, he interviewed many famous personalities from all over the world namely Jimmy Hoffa, John F. Kennedy, Billie Sol Estes, Malcolm X (Human Rights Activist), Jerry Rubin, Muhammad Ali (heavyweight boxing champion) and much more.

After working for others and with various companies, Phil started his own show, “The Phil Donahue Show” on WLWD, now WDTN in the year 1967. It was this show from which Phil got his stardom. His program became very popular and was broadcasted at almost 40 channels and in January of 1970, his show got nationwide syndication. This show became the first talk show that allowed the participation of live audience and ran for 29 long years. The show discussed hot topics which were never ever discussed publically. Topics included homosexuality, women’s rights, misdeeds of the Catholic Church, and much more.

Phil Donahue became the first ever person to have a live discussion between an American and Soviet audience. He paired with Vladimir Pozner, a Soviet radio, and TV personality to conduct the discussion. This discussion added another feather to the Donahue’s hat as his talk show became the first ever talk shows that were filmed in the Soviet Union in 1987. With the coming years, Donahue’s show audience decreased and he lost his ratings because of which the show went off-air in 1966.

Phil Donahue has received many awards during his 29 years of relationship with the television. Let’s take a look at them:

Phil Donahue married his first wife, Margaret Cooney in the year 1958 which unfortunately ended in divorce in the year 1975. He is survived by five children from his first marriage; four sons, Michael, Kevin, Jim and Daniel, and one daughter, Mary Rose. In 1980, Phil married to one of his frequent guests on the show, actress Marlo Thomas.

Phil Donahue is an American and his religion is Irish Catholic.

After airing the last episode of the very famous talk show of the era, Donahue took a break of 7 years and returned to the television in the year 2002 when he was approached by MSNBC channel for the talk show. The show went on-air in 2002 but the channel cancelled the show within a year i.e. in February 2003.

After the cancellation of the show, Donahue again came to the light by working as a co-director with the film-maker Ellen Spiro for the feature documentary, “Body of War” in the year 2006. The film received a tremendous response from the jury as well as audience and was nominated for Oscars.

Phil has created a legacy with his intelligence, curiosity, and enthusiasm in hosting the informative talk-show for the U.S. audience.

Interestingly, since the beginning of Phil’s career till date, there are no reports of him indulging in any controversies. There has been no evidence of him involving in any affairs or illegal activities till date. Phil is having a very good and an exemplary television history of almost 30 years.