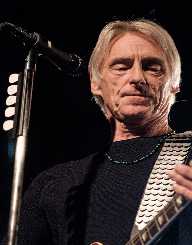 On 25 May 1958, Paul Weller was born in Woking, Surrey, England. He was a British Rock Singer, Songwriter and a Guitarists.

Paul Weller was raised in a humble family; Paul's father was a taxi driver and a builder while his mother was a part-time cleaner.

Paul Weller had tremendous interest in music from an early age. His love for music started with “The Who" (Now the Beatles) and "Small Faces." When Paul was eleven years, Weller's interest in music had grown significantly, and he began playing the guitar. Paul's music call exploded when he watched "Status Quo" in a 1972 concert. Paul reemerged the Jam band in the same year, playing the bass guitar as his best friends Steve Brookes played lead guitar and Dave Waller playing rhythm guitar. Paul's father took up the role of mentoring and managing them. They started booking the band to perform in Working Men's Clubs.

A drummer, Rick Buckler, joined the band and Bruce Foxton replaced Waller on the rhythm guitar. They worked very hard and started gaining reputation. They played the mixture of the Beatles Covers as well as compositions done by Weller and Brookes.

Paul Weller was enrolled at Marbury County First School in 1963. While here, Paul did well and also take the opportunity to learn different music skills.

Paul Weller proceeded to Sheerwater County Secondary school. Music had become the most prominent part of him at this stage.

Paul Weller was part of "The Jam" band since its formation until it was disbanded in 1982. In 1977, The Jam band produced its first single "In the City." The single did very well and even ranked in the UK top 40 list. The performance of their debut single encouraged them to produce more, and after two years, they did a political single "The Eton Rifles." The ranking of this song was excellent as it appeared in the UK top 10 songs.

In 1980, they released "Going underground." The band had two other singles "That's Entertainment" and "Just Who is the 5 O'clock Hero?" which were ranked position 21 and eight respectively in the UK singles chart. The song did well even outside the UK, having large sales in Germany. The Jam Band was disbanded in 1982 after producing the final single "Beat Surrender" which topped the UK list after one week from release.

In 1983,  Paul Weller joined hands with Mick Talbot, a keyboard player, and a band called "The Style Council." He did different genres of music, and they were well-accepted in the market. They released "Shout to the Top" which topped the chart, and the acceptance was high even in Australia. The band split in 1989 after its popularity declined sharply.

After one year, Paul Weller ventured into solo music, he formed "The Paul Weller Movement" and went for touring as well as performed in clubs. In 1990, Paul released "Into Tomorrow "under "Freedom High Records, his independent label, and the song peaked at UK top 40.

In 1995,  Paul Weller became the best seller in the UK courtesy of his album "Stanley Road." He greatly got involved in popularising the pop and rock music. He became a role model for many upcoming artists.

In 1997 Paul Weller released "Heavy Soul," an album that hit instantly and the same year, he released "Modern Classics: Greatest Hits." In 2000, he released his fifth album "Heliocentric" followed by his second live album "Days of Speed." He also released "Illumination."

From 2004 to 2006, Paul Weller worked hard and released several albums including "Studio 150","Hit Parade," "22 Dreams" and "Echoes Round the Sun." He also made guest appearances in Dot Allison's album "Room 71/2" in 2009 and jointly wrote the song "Love's Got Me Crazy." In 2010, Paul released an album "Wake up the Nation" which was commercially successful. Paul also tried his hand as a lyrist for Olly Murs album "Never Benn Better."

The success of  Paul Weller in music and songwriting is undisputed. He played a significant role in the 1970's and 1980's mod revival. Paul has recorded numerous albums which were received well in the music market.

Paul Weller has also been of great help to the needy, and he has performed on several occasions to support charity work.

In 2006,  Paul Weller received the "Lifetime Achievement Award' at the BRIT Awards for his "outstanding contribution to music."

Paul Weller has contributed to many charity works. In 1984, Paul formed "The Council Collective," a charity organization that released records to support the UK Miners' Strike.

In 2012,  Paul Weller performed for Crisis Charity Event in the Hammersmith Apollo, together with other artists. One year later, he took part in a stage performance and played the drums. This was aimed at supporting Teenage Cancer Trust.

In 1987, Paul Weller married Dee C. Lee, the backing singer in The Style Council. They got two children together, Leah and Nathaniel. The son followed the footsteps of his father and started singing. He once got on stage with his father at Hammersmith Apollo when he was only twelve years. The couple, however, divorced in1998.

Paul Weller got into engagement with a make-up artist called Lucy. The relationship was, however, short-lived. They had a daughter named Dylan.

In mid-1990's, Paul Weller was also involved in a romantic relationship with Samantha Stock during his recording at the Manor Studios. They had two children, Jessamine and Stevie Mac. The couple broke up in 2008.

After the breakup,  Paul Weller moved in with Hannah Andrews who backed him up on his "22 Dreams" album. They got married in September 2010 on the Italian Island of Capri. They were blessed with twin boys, John Paul and Bowie, born on January 14, 2012.

In 2014, Paul Weller petitioned Associated Newspaper, complaining of an incidence where they published photographs of his family when they were out shopping on Mail Online. He won 10,000 pounds in damages.

Paul Weller's father who was a long-term friend and manager, John Weller, passed away after suffering from Pneumonia. He was aged 77 years.