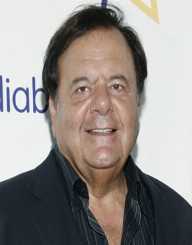 After graduating from high school, Paul Sorvino went on to attend the American Musical and Dramatic Academy. He later graduated from this school in 1962.

Paul Sorvino made his Broadway debut in 1964 when he appeared in the play Bajour. This helped to kick off his theater acting career. Before the end of the decade, he also appeared in Mating Dance and Skyscraper, which were both Broadway productions.

Even though Paul Sorvino had begun his screen-acting career in 1970, he continued to work on his theatre career. During this decade, he appeared in three Broadway plays The Championship Season, an American Millionaire, and The Baker’s Wife. He also directed the play Wheelbarrow Closers in 1976.

Paul Sorvino’s film career began in 1970 when he appeared as a small character in the movie Where’s Poppa? For the next several years, Paul Sorvino continued to act in small parts in films like Cry Uncle and Made for Each Other. In 1974, he took on his first guest role in a television show, in a production of King Lear on Great Performances.

Sorvino’s career really began to kick off in the 1980’s. During this decade, he worked in guest roles in television shows and had small parts in movies. He also had recurring roles in the shows Chiefs and The Oldest Rookie. Some of the other television shows he has appeared on include Today’s FBI and Murder, She Wrote. He also appeared in the films Melanie, The Stuff, Off the Wall, A Fine Mess, Very Close Quarters, and Almost Partners.

It wasn’t until the 1990’s that Paul Sorvino began to earn memorable roles. Some examples include his role of Paul Cicero in Goodfellas and his recurring role as Phil Cerreta on Law & Order. Some of the other famous shows and movies he was in include Backstreet Justice, Cover Me, Nixon, Love Is All There Is, Money Talk, Men with Guns, and Most Wanted.

Paul Sorvino earned his next recurring television role in 2000 as Frank DeLuca on That’s Life. He acted on this show until 2002. In 2004, he had another recurring role as Al Miller on Still Standing. Other than these two shows, he mostly appeared in small parts in movies. Some of these movies include Ciao America Mambo Italiano, Mr. Fix It, Last Hour, and The Wild Stallion.

As of the 2010’s, Paul Sorvino continues to act in television shows and movies. However, it was not until 2017 that he earned his next (and most recent) recurring television role as Nicolo Rizzuto Sr. on Bad Blood. Some of his most recent film and television appearances have been on the following: The Trouble with Cali, The Hybrids Family, A Place for Heros, Elementary, A Winter Rose, Undercover Grandpa, and Beneath the Leaves.

Over the course of his acting career, Paul Sorvino has won almost a dozen awards and has been nominated for several others. Some of his most impressive awards are listed below.

Paul Sorvino was first married to Lorraine. This couple had three children together: Amanda, Michael, and Mira. Both Michael and Mira also work in television and film.