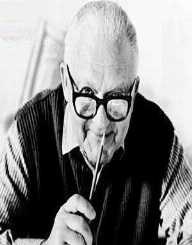 Paul Rand was a graphic designer who made the designing logo a reputable profession. Many consider him a pioneer of corporate logo designer using Swiss Style graphic design.

Paul Rand was born Peretz Rosenbaum, he was born on 15th of August 1914, in Brownsville, Brooklyn, New York.

This was first of three to Orthodox Jewish migrants Itzhak Yehuda and Leah Rosenbaum. The parents owned a grocery store; it was where Peretz “Patsy” first created his signs in.

After Paul Rand graduated from P. S. 109, his father funded Pratt Institute night school on the condition that Paul went to Haaren High School in Manhattan.

When Paul Rand finished from Pratt’s, he went onto study in the Art Students League in New York for one year in 1933. Despite the art classes, Paul was mostly self- taught.

After graduating from school, Paul Rand  Paul worked in a syndicate creating stock images. He managed to create a portfolio featuring the Sachplakat, or the object poster influenced by German advertising style.

Peretz Rosenbaum changed his name to Paul Rand to sound more American. Paul Rand became his first and most long-lasting corporate identity creation, with the opening of his studio on East 38th Street.

A year after Paul Rand name change, Paul was first hired by Direction Magazine, where he did pro bono work in exchange for full artistic freedom. He managed to receive many praises, including from his Hungarian idol artist László Moholy-Nagy. With new recognition,

Paul’s first paid job was for Apparel Arts magazine in 1936, where he had to design a page layout for its anniversary issue.

The success of the commission earned him a full-time job, and he was the art director for the Esquire-Coronet magazines a year after it was offered.

Three years later in 1941, Paul Rand was headhunted by William H. Weintraub agency, becoming the chief art director there. He was the pioneer artist who started collaborating with copywriters, starting with Bill Bernbach.

Paul Rand stayed there until 1954, after which he had his studio in Weston. He published his first book in 1946, titled Thoughts on Design.

Since 1956, he designed a cover for his wife’s children books for until 1970. Paul became a lecture in 1956, where he was a Professor in graphic design for Yale University in New Haven, Connecticut.

Paul Rand had a five-year break from 1969 but resumed teaching in 1974. It was also during the productive year of 56 that Paul designed the famous IBM logo, followed by Westinghouse and UPS in 1961, ABC in 1962 and lastly it was Next computer company in 1986, owned by Steve Jobs.

Paul Rand transformed the world of logo and advertising into an art form since he started working in the 1930s. He influenced how major companies use graphics to establish their identity.

Example of Paul’s most famous work is corporate logos for IBM, Westinghouse, and UPS.

Paul Rand was inducted into the New York Art Directors Club Hall of Fame in 1972. He also wrote three memoirs.

Paul Rand won a gold medal from the Art Directors Club for his Morse Code advertisement in 1954.

Paul Rand later married Marion Swannie, but they had no children together. Paul first met her when she was an amateur designer and administrator at IBM. Paul died of cancer in 1996; he was eighty- two years old.

Paul Rand was buried in Beth El Cemetery and was survived by his daughter, wife and two grandsons.