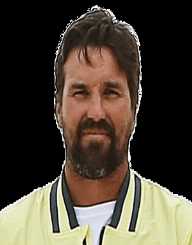 Pat Rafter was born on December 28th, 1972. He is a retired tennis professional player. He is famous for his unique style of play termed as serve-and-volley. In 1999, he reached to the world’s number 1 rankings in tennis singles. Throughout his tennis playing professional career, he has bagged home the US Open titles for two consecutive times in 1997 and 1998.

He is a Wimbledon’s runner-up both in 2000 and in 2001. Rafter has broken records for being the first male athlete to take home the Canada Masters, the US Open and the Cincinnati Masters all in one year.

Patrick Michael Rafter AKA Pat Rafter was born on December 28th, in 1972 in Mount Isa, Australia. He is the seventh son of Jim and Jocelyn Rafter. Rafter was born in a family of nine children. Right from a tender age, Rafter developed a strong liking for sports.

By the time he was aged five, he had begun playing tennis. He did this with the help of his father and his three older brothers. Accordingly, Rafter decided to play tennis professionally when he was in his teens.

In 1991, Pat Rafter took his tennis playing hobby on a professional level. During this period, things were on a rough patch, and it was not until 1994 that he emerged victorious after winning a title in Manchester. The subsequent years were however not interesting. Nonetheless, in 1997, he reached semifinals during the French Open competitions. Unfortunately, he was defeated by Sergi Bruguera.

During the same year in 1997, Pat Rafter did not lose hope after losing in the French Opens. Later that year, he participated in the U.S. Open. Surprisingly, he won the U.S. Open title. This was a massive surprise to many. He had defeated the likes of Andriy Medvedev, Lionel Rou, Magnus Larsson, and Greg Rusedski.

This was a considerable achievement to Pat Rafter as he was the first non-American to take home the title. Stefan Edberg had initially held this record for bagging home the title in 1992. Rafter capped up that year with recognition of being the second world’s best tennis player.  Pete Sampras was the world's best during this year. His unexpected win was however accompanied with criticism from some tennis players claiming that he was a "one-slam wonder."

In 1998, Pat Rafter was up again on his feet in spite of the critics he obtained. This was a good year for him as he won some titles including the Canadian Open and the Cincinnati Open. He won all these titles in a row. This is a feat that was only attained by Andre Agassi, Andy Roddick, and Rafael Nadal.

Rafter was again among the finalist in the U.S. Open competitions in 1998. He had defeated some notable players including the former world’s number one champion, Pete Sampras. He later defended his title by competing against Mark Philippoussis who was also an Australian professional tennis player. Combined, Rafter had won up to six major titles in 1998.

During the French Opens competition in 1999, Pat Rafter managed to defeat Roger Federer in four sets. After this, he successfully competed in the Wimbledon semifinals. This was an achievement he had not attained in his tennis playing career. Unfortunately, he lost to Andre Agassi. In July the same year, he took the title of world’s number 1 for one week. This made him the shortest reigning champion ever.

Rafter officially retired from playing tennis in 2002. This was after spending several months without being involved in major tournaments.

Pat Rafter got married in 2004 to his longtime sweetheart named Lara Feltham. They are proud parents of two children.