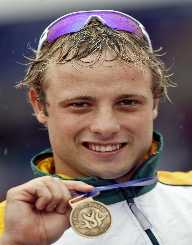 Oscar Leonard Carl Pistorius best known as Oscar Pistorius is a South African Paralympic and Olympic sprint runner. He became the tenth athlete to compete in both events as well as non-disabled sprint events. Oscar Pistorius had his two legs amputated when he was 11 months but that wasn’t an impediment for his future success.

After a legal battle with IAAF, he had the opportunity to compete in non-disabled events after several rejections. According to IAAF, his artificial limbs gave him an unfair advantage over others. He subsequently competed in the 2011 World Championship in Athletics making his the first amputee to win a medal in a non-disabled track event

Oscar Pistorius also competed at the 2012 Summer Olympics to become the first double-leg amputee to compete in that event. Pistorius became the center of controversy when he fatally shot his girlfriend; model Reeva Steenkamp on 14th February 2013. Though he initially claimed it was an accident, presuming it was an intruder, he was first charged with culpable murder and sentenced to five years imprisonment but later convicted of murder after an appeals court overturned the previous verdict. Pistorius was subsequently sentenced to six years imprisonment for murder.

Oscar Leonard Carl Pistorius was born on November 22, 1986, in Santon Johannesburg to Henke and Sheila Pistorius. He was the second child of his parent with an elder brother Carl and a younger sister Aimee. Having an Italian ancestral background, Pistorius was a white South African of the Afrikaner ethnicity. He was brought up in a Christian home. At eleven months,

Oscar Pistorius diagnosed with fibular hemimelia, therefore, the need to amputate his two legs at knee level. He had his education at the Constantia Kloof Primary School and continued at the Pretoria Boys High School. Pistorius was a sports person and participated in several sporting activities including rugby, water polo and tennis in school. He had his training at the Jannie Brooks’ garage gym in Pretoria.

After suffering a knee injury through playing rugby in 2003, Pistorius developed an interest in running in 2004. He had his first running blade fitted for him by South African prosthetist Francois van der Watt. However subsequent orders from a local engineer broke easily making Francois van der Watt referPistorius to an American prosthetist and Paralympic sprinter Brain Frassure to fit him of blades by Ossur, an Icelandic company. After high school, he enrolled at the University of Pretoria in 2006 where he studied Bachelor of Trade & Commerce in business management with sports science.

Nicknamed the Blade Runner and the fastest man on no legs, Pistorius started his sporting career competing in T44, “single below-knee amputee” events despite him being classified as T43 “double below amputee”. His maiden international event was at the 2004 Summer Paralympics in Athens where he was third in the T44 100-meter event and first in the 200 meters setting a new world record time of 21.97 seconds. Having made a world record,

Oscar Pistorius returned to South African to compete in the non-disabled Championship in 2005 finishing sixth in the 400 meters with a record time of 47.34 seconds. That same year, he partook in the Paralympic World Cup where he also won gold in both 100 and 200 meters beating his previous 200-meter world record.

Oscar Pistorius continued his winning ways at the 2006 IPC Athletic World Championship where he also won gold in the 100,200 and 400 meter and once again setting a new world record in the 200 meters. Pistorius early athletics was characterized with breaking and setting new records in most of the events he competed. During the 2007 South African Senior Athletic Championship in Durban, he made a made a new disability world record for 400 meters with 46.56 seconds.

Oscar Pistorius also set a new record for 100 meters with 10.91seconds and 200 meters with 21.58 seconds at the Nedbank Championships for the Physically Disabled in Johannesburg in 2007. He competed in several other events and aimed at competing in the 2008 Summer Olympic in Beijing, China but was not part of the South African Olympic Committee selection.

In 2007, the IAAF investigated the use of the carbon fiber prosthetic limbs, Flex-Foot Cheetah used by Pistorius and concluded that it gained him an undue advantage over other athletes with natural limbs. He was therefore banned from competing in all IAAF events including the 2008 Paralympic events. He appealed against the IAAF decision at the Court of Arbitration for Sports which after two days of hearing upheld his appeal giving his the chance to compete.

Oscar Pistorius competed in the 100, 200 and 400 meters event at the 2008 Summer Paralympics in Beijing. He was able to set a new 100 meters record with 11.16 seconds to win gold, a record of 21.67 seconds, to win gold in the 200 meters and also won the 400 meters with a record of 47.49 seconds hitting a hat-trick. In 2012 he was selected by the South African Sports Confederation and Olympic Committee to partake in the 2012 Summer Olympics.

During the event, he became the first amputee runner to compete in an Olympic Game. He also competed in the 2012 Paralympic games and made a new T43 world record of 21.30 second during the heat and won gold in the South African 4 ­­× 100-meter relay team. The team made a record of 41.78 seconds. He also won gold in the T44 400 meters but was however not able to defend his Beijing 100 meter record.

Oscar Pistorius has two visible tattoos, one on his right arm which is the birth and death date of his mother"LVIII V-VIII – II III VI" (8 May 1958 – 6 March 2002). The second tattoo is a quotation from the Bible 1 Corinthians 9:26-27 on his back. Apart from his known sports, his hobbies include motorbiking, breeding horse race and architecture.

Oscar Pistorius released his autobiography Dream Runner published in Italian with a journalist with La Gazzetta Dello Sport, Gianni Merlo in 2008. A year on, the English version, Blade Runner was also released. His combined sponsorship deal with Ossur, BT, Nike, Thierry Mugler and Oakley is worth $2 million a year. However, his contract with Nike was suspended on 21 February 2013, after the shooting incident.

Oscar Pistorius shot his girlfriend, a South African model, Reeva Steenkamp in his Pretoria home on February 14, 2013. He admitted he fired the shot but took the girlfriend as a possible intruder. He was arrested and arraigned before the court on the charge of murder on March 3, 2014.

The trial was however adjourned to make space for Pistorius to undergo psychiatric evaluation until to determine whether he could criminally be held responsible which later proved he had no mental disorder. After several back and fronts, he was charged with culpable homicide and for reckless endangerment for a previous case of discharging a firearm in a restaurant.

Oscar Pistorius received a 5-year jail term for culpable homicide and three years for reckless endangerment to run concurrently. After serving one-sixth of his prison term, he was eligible Under South African law to be released under correctional supervision and was subsequently released on good behavior but to serve house arrest on October 19, 2015. The release, which was previously set to effect on August 21, 2015, was blocked by the South African Justice Minister Michael Masutha.

The sentence was later appealed by prosecutors after several protests by advocacy groups who saw the sentence was too lenient whichJudge Thokozile Masipa ruled in affirming, but with a condition that the length of the sentence could not be challenged.

The Supreme Court of Appeal, Bloemfontein sat on the case on November 13, 2015, and by unanimous decision overturned the culpable homicide conviction and further charged him with the murder of Reeva Steenkamp.

Oscar Pistorius was denied of appeal on March 3, 2016, and on July 6, 2016, judge Thokozile Masipa sentenced to six years imprisonment for murder to be served at the Kgosi Mampury II jail. He was later transferred toKgosiMampury II jail to the Atteridgeville Correctional Centre.

Oscar Pistorius has won several medals and other recognitions throughout his career. The South African President honored him with the Order of Ikhamanga in Bronze for outstanding achievement in sports in 2006, he was also awarded the BBC Sports Personality of the Year Helen Rollason Award for outstanding courage and achievement in the face of adversity in 2007. In 2012, he was awarded the Laureus World Sports Awards for Sportsperson of the Year with Disability.