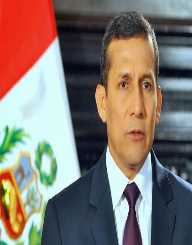 Also Known For : President of Peru

Ollanta Humala was born in Peru in 1962 as Ollanta Moisés Humala Tasso. His father is Isaac Humala who is a lawyer and a member of the Communist Party of Peru. Isaac Humala is also a strong supporter of the Etnocacerista movement. Ollanto’s mother is Elena Tasso, a descendant of an Italian family who moved to Peru in the 19th century. Ollanta has two brothers, Antauro and Ulises. Ulises Humala is a professor, but his other brother Antauro Humala is now imprisoned for 25 years because he kidnapped 17 police officers for whole three days and killed 4 of them.

Ollanta Humala studied in a French-Peruvian school. Later he continued his studies in “Colegio Cooperativo The Great Union.”  Interestingly, this French-Peruvian college was founded by the Peruvian-Japanese community.

In 1982, Ollanta Humala started attending the Chorillos Military School which marked the beginning of his military career. Ollanta Humala was in the military during the war against “Shining Path” in 1992, and the fight against Ecuador in 1995.

Ollanta Humala was the leader of the uprising in the year 2000. The motivation for the rebellion against Alberto Fujimori was the corruption scandals. It happened when Fujimori was only a couple days away from giving up being the President.  It was stated that a former intelligence chief Vladimiro Montesinos was bribed by an opposition congressman as the society had a fear of him having still very much influence in the existing government.

Therefore, Humala together with 40 soldiers led the uprising. Some of the 40 soldiers left Humala. Thus he spoke up to patriots of Peru to join the rebellion. Around 300 soldiers joined Humala. It was stated that Antauro Humala led these men.

The Peruvian Army was instructed to capture these men, but they were able to withstand it until Fujimori left the office and Paniagua became the President. A couple of months later Humala was excused and could continue his military duty.

He then graduated from the Pontifical Catholic University of Peru. He graduated as a Master of Political Science.

In 2004, he had to retire from the military against his wish because of an etnocacerista rebellion. This rebellion happened in 2005 and was led by Antauro Humala.

In 2005, Ollanta Humala founded the Peruvian Nationalist Party and ran for the presidency the next year. The Union supported him for Peru. Interestingly the founder of the Union for Peru Javier Pérez de Cuéllar was against Humala’s run for the presidency.

The campaign took a turn when Ollanta’s father Isaac claimed he would offer amnesty to the members of Shining Path. Isaac expressed several highly controversial ideas during this presidential campaign. Also, Ollanta’s mother had given a controversial statement during the campaign. She expressed that all homosexually oriented people should be shot.

These very radical views and statements made Ollanta distance himself from the family at the time of the campaign. Ollanta’s brother Ulises also had a campaign and ran for the presidency, but did not succeed and came in as the 14th candidate.

The election happened in two rounds. In the first round, Ollanta Humala collected more than 30% of the valid votes. Alan García came in second. Right before the Presidential debate had to take place, a video of Montesinos was published. This video contained information about Humala leading the uprising in the year 2000 against Fujimori.

Humala immediately attributed the release of the video to García’s Party to undermine Humala’s candidacy. After this scandal, the second round of elections took place. This time Humala collected 10% fewer votes than García and Humala had to admit defeat.

Peruvian prosecutors filed charges against Ollanta Humala a couple of months after the unsuccessful election. The charges stated that Humala had violated human rights against Shining Path during his service in 1992. Humala denied these charges.

In 2011 the next election took place. Ollanta Humala again ran for president, but this time he had more support and was elected with 51.5% of the votes. After the results of this election were announced, the Peruvian stocks dropped immediately. This drop was the most substantial experienced in Peruvian history. A couple of months later it stabilized.

In 2016, in the middle of the next presidential run, Brazilian Federal Police accused Humala of receiving bribes. Ollanta Humala declined these accusations and had not spoken to the public media about it after this.