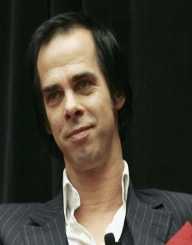 Nick Cave is an exceptional, multi-instrumentalist Australian musician, songwriter, screenwriter and an occasional film actor. "Nick Cave... an American Artist-beyond comparison, beyond genre, beyond dispute" were the words used to describe Nick Cave by Ed St. John a committee chairperson of the renowned ARIA Hall of Fame. He’s best known for his unshakable strong faith in his performances. In 2007, Cave was inducted into the prestigious category of ARIA Hall of Fame.

Nick Cave is also known as Nicholas Edward and his birthday is on September 22, 1957. He was born to Colin Frank Cave, an English teacher, and his mother Dawn Cave (Treadwell), a librarian in Australia. He was raised in Wangaratta as an Anglican and was taught the value of Literature in his tender years. Due to his troublesome juvenile inclinations, he was sent to Caulfied Grammar School a boarding institution.

When his family relocated to Murrumbeena in a suburb called Melbourne he became a day-scholar. At the age of 19, he was arrested and taken to St. Kilda police station. His father died in a car accident without his knowledge. His mother told him the sad news while bailing him out of the police station. His father’s death had a strong bearing on his later life. This left a large “void" which provoked him to find a true purpose in his life.

Although Nick Cave had enrolled to study painting in Caulfied Institute of Technology (1976), he dropped to pursue a music career in 1977. It was at this time that he commenced taking heroin drugs.

Back in high school in mid- 1970s, Nick Cave formed his first band together with Mick Harvey (guitar), Brett Purcell (Bass), Phil Calvert (drum), Chris Coyne (saxophone) and John Cochivera (guitar) called ' The Boys Next Door' They made a rock-solid repertoire of cover songs by Alex Harvey, Roxy Music, Lou Reed, Alice Cooper and David Bowie among others. They marked their debut by a cover for ' These Noots Are Made for Walking' in 1978. The following year they made their first album 'Door, Door'.

They later changed their band name to 'The Birthday Party' and they went to explore new opportunities in London. Perplexed by life in England, their live shows and band's sound gradually became violent. To some extent, they were considered the darkest group and were later credited for ‘gothic rock' a new generation of music genre. ‘The Birthday Party' produced 'Prayers on fire' 'Junkyard'(1982), 'Mutiny' (1983). They made a total of three albums and after moving to Berlin they disbanded.

‘Nick Cave and the Bad Seeds'

In 1983, Nick Cave formed ‘Nick Cave and the Bad Seeds' band and released its debut album in 1984. He used the band to explore his obsession with religion, love, death, violence, blues, gospel and rock.

Caves constantly thought about the Old Testament and this influenced him to produce 'The Mercy Seat' which evidently serves as his signature song. He has had several commercially successful productions such as the 'Murder Ballads' a 1996 album. 'Murder Ballads' album had songs such as ' Where the Wild Roses Grow' this single featured Kylie Minogue. It has been his most successful song to date. 'Skeleton' is the band's most recent album, released in 2016.

In 2006, Nick Cave formed and alternative rock group called ‘Grinderman’ and produced two albums. It was formed to ease the negative impact that existed in the 'The Bad Seeds'. 'Grinderman' first album was released in 2007. This album received very positive acclaim and prompted the release of the second album 'Grinderman 2' in 2010.

Nick Cave has appeared in Win Wenders' 'Wings of Desire' film (1987). This film featured the band 'The Bad Seeds' performing in Berlin. He has been an actor in 'Dandy' alongside BlixaBargeld in the 1988 Peter Sempel film. Cave also starred in several movies in 1988, he starred in ' Ghosts...of the Civil Dead' an Australian prison film.

Some of Cave’s songs have appeared in several Hollywood blockbusters. For instance, in "Batman Forever' (1995) the soundtrack comes from Cave’s ' There is a Light' song.

Cave’s 'People Aint No Good' song appeared in the animated movie 'Shriek 2' and 'O children' was featured in 'Harry Potter and the Death Hallows-Part 1. Cave’s 'Release the Bats' was used in 2000 in Andrew Dominik film 'Chopper'.

Nick Cave dated Anita Lane, a musician and a member of his band. Jointly, they performed several songs and music projects. Cave married Viviane Carneiro a Brazilian journalist from 1990 to 1996 and had a son called Luke. He later married a model, Susie Bick in November 1999. They had twin boys Arthur and Earl. He had another son from his previous relations with Beau Lazenby and named him Jethro. It was unfortunate that one of this son Arthur fell off Ovingdean cliff near Brighton, England and died in July 2015.

As a novelist, Nick Cave authored two novels: 'And the Ass Saw the Angel’ and 'The Death of Bunny Munro’ in 1989 and 2009 respectively. 'King Ink’ his first book was released in 1988. This was a lyrics and plays collection which was a joint venture project with Lydia Lunch. 'King Ink II was released the following year.

Nick Cave initiated comicality in the "Rock" music genre. Due to his ambitions in rock music he has been called 'Prince of Darkness' and NME referred to him as 'the grand lord of gothic lushness'.