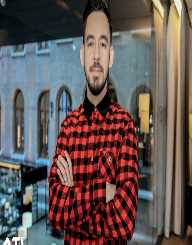 Mike Shinoda was born on 11 February 1977 in Agoura Hills, California. He has a brother Jason. Shinoda’s father is a Japanese-American, and his mother is European. His mother was keen for her sons to learn classical music and from the age of six, Mike Shinoda took piano lessons. Later his interests turned to jazz, hip-hop, and blues.

Mike Shinoda graduated as a graphic designer at the same time concentrating on the band that he had formed in college with Brad Delson.

Mike Shinoda was educated at the Agoura High School and then enrolled at the Art Center College of Design. He qualified as a graphic designer.

While still at college, Mike Shinoda co-founded Linkin Park park with fellow student Brad Delson. Originally the name was Zero, but they later changed the name. In 2002, they released their first album, Hybrid Theory. Hybrid Theory was phenomenally successful and sold ten million copies in the United States.

The band’s first remix album was Reanimation (2002) Mike Shinoda was serving as both a musician and a sound engineer. Their next album was Meteora (2003). Then in 2004, Collision Course with Jay-Z was released. Shinoda again mixed and produced the album. Collision Course went on to win a Grammy Award for best rap song collaboration. In 2007, he sang on Linkin Park's Minutes to Midnight, and he was also on Linkin Park’s A Thousand Suns (2010), which he co-produced with Rick Rubin. Living Things (2012), Recharged (2013) and a single A Light That Never Comes (2014 ) followed.

A Light That Never Comes was ranked 72 on the Top 100 Metal Vocalists of All Time on the Hit Parader list.

In 2004, Mike Shinoda had an art exhibition entitled Diamonds Spades Hearts & Clubs. Some of these paintings eventually became part of The Rising Tied artwork. He had another art exhibition in 2009. This second exhibition was held at the Japanese American National Museum in LA and was called Glorious Excess (BORN). This exhibition included nine new artworks.

In 2006, Mike Shinoda was presented with the Japanese American National Museum’s Award of Excellence.

Mike Shinoda married Anne Hillinger in 2003. Hillinger is an author. The couple lives in Beverly Hills, California.
He has a Twitter presence with over 600K followers: @mikeshinoda

To date, the fund has raised over $6 million and has helped numerous victims of natural disasters. Apart from the 2004 tsunami, the organization has responded to Hurricane Sandy, Typhoon Haiyan, the 2010 Haiti earthquake, the California wildfires in 2007 and Cyclone Sidr in Bangladesh.