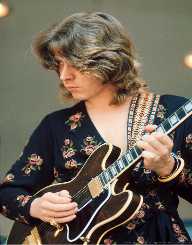 Mick Taylor is a renowned guitarist, songwriter, and English musician. Mick Taylor was a member of the famous band `Rolling stones’ and became part of some of their best albums. Mick left the band at around 1974 but later associated with them in many of their shows and productions. More so, Mick was part of an English blues-rock band named `John Mayall and the Blues Breakers,’ producing more remarkable albums with them. Taylor has also released many solo albums and in collaborations with other famous artists.

Mick Taylor was ranked the 37th best guitarist of all time in 2011 by the rolling stone in its rankings of 100 guitarists in the Bi-weekly magazine.

Michael Kevin `Mick’ Taylor was born on 17th January 1949, in Welwyn Garden city. Taylor's parents were a working class, and his father worked for De Havilland Aircraft Company, whereby he was a fitter. He worked in Hatfield, Hertfordshire in England and mike was brought up here.

Taylor's mother and brother played the guitar and taught young Mike how to do it, which helped him to start playing the guitar at a tender age of nine. More so, Mike often went to shows of `Bill Haley and the Comets’ with his parents and loved their performances, which inspired him to join an American rock band later in life. During his school days as a teenager, Mike could form bands with fellow schoolmates and perform at various concerts. Part of the bands joined a group named The Gods.

While he was 16, Mick Taylor attended a Mayall’s Bluesbreakers performance. Their guitarist had not appeared, but his guitar had been set up on stage. For his love for playing the guitar, Mike approached John Mayall and asked to fill the position. Mayall agreed, they played the set together, and this encounter proved crucial to his career start. Mick Taylor later made his official debut for the band in 1966 when the band's guitarist Peter green left, and Mayall offered him the position. This happened at a club named `Manor house’ in London, and Mike's performance was awaited with a lot of enthusiasm from the fans, who were eager to see if he was a good fit to fill the position.

Mick Taylor worked with them up to around 1969, touring with them and performing in notable albums for the band. Mike slowly developed a guitar style that was blues-based and had influences of Latin and jazz styles.

In the year 1969, Mick Taylor was recommended to renowned band `Rolling stone’ by John Mayall, for a lead vocalist role, to fill up the position of Brain Jones. Rolling stones Jagger and Keith Richards were impressed by him during the rehearsals, and his new musical career began instantly.

Mick Taylor made his debut on July 5, 1969, at a concert in `Hyde Park’ in London. During the 1960’s and 1970’s, the band released a lot of classic albums. Some of these are; `Get Yer ya-yas out!’, `Sticky fingers,’ `Exile on Main St.’ and `Let it bleed.’ On the album `Sticky fingers’, only Mike and Jagger completed two of the tracks. Mike only co-authored a single track named `ventilator blues’ on one of the albums. At the time, Mike's tone was smooth and lyrical and was completely different from that of fellow band member Richards.

In 1973, Mick Taylor suffered from acute sinusitis and had to undergo surgery, which caused him to miss some studio sessions for the band’s upcoming album named `Its only rock and roll.’ When recovered and got back to the band, Mike had a hard time getting along with the Richards who later caused him to depart from the band in 1974. He then explained that one of the causes of this was that he was not being accorded enough credit for some of the songs they produced.

However, Mick Taylor still worked on several occasion with the band members even after leaving. Some of their collaborations are; `I’ve got my album to do,’ `Now look’ and Pay pack and follow.’ More so, Mike often performed with them for example during their concert at Kemper Arena in Kansas City on 14th December 1981. Taylor was part of their worldwide tours too, i.e., their 50th anniversary across Europe and North America tour between 2012 and 2013.

After leaving the band, Mick Taylor also became part of a new group by Jack Bruce, which did not last long and ended in 1976. Mike also signed a deal with Columbia Records and released some solo albums, for example, `Mick Taylor’ in 1979 and another one in 2000 named `A stone throw.’

Mick Taylor was made part of the Rock `n Roll Hall of fame with the Rolling stone in 1989. He was ranked 37th place among 100 greatest guitarists ever by the rolling stone magazine in 2012. His handprints have been on Hollywood’s Rock walk for over a decade

Mick Taylor got married to Rose Millar in 1975 after leaving the stones. The couple had a daughter in 1971, named Chloe. However, the marriage did not work, and the two got divorced a few years later. Mike then married Valerie, and the relationship did not last too. Taylor then had a short relationship with one of his backing vocal artists that resulted in his second daughter named Emma.