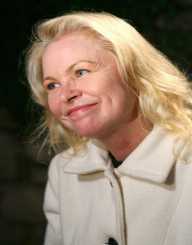 Singer and actress Michelle Phillips was born Holly Michelle Gilliam in Long Beach, California on the 4 June 1944. Her father Gardner Graham was a movie-production assistant in Los Angeles. She had one sibling, a sister Rusty and their mother Joyce, died of a brain aneurysm when Phillips was five years of age. Her father then relocated to México City with his daughters where he worked as a probation officer before later returning to Los Angeles.

In Los Angeles, Michelle Phillips worked as a teenage model and was involved in the 1960s hippie culture when she met John Phillips.

They formed a band The Journeymen which evolved into The Mamas and the Papas.

Singer Cass Elliot joined the band, and soon they found success, having various hits including California Dreamin’(1966), Monday, Monday (1966) and Dedicated To The One I Love (1968). The band also helped organize the inaugural Monterey Pop Festival in 1967 which included the yet undiscovered Jimi Hendrix and Janis Joplin. In 1968 the band broke up due to a personal conflict between the members.

After the breakup of The Mamas and The Papas, Michelle Phillips took to acting and appeared in various films and television programmes. She starred in film Dillinger (1973) with Warren Oates; Aspen and Valentino, the soap opera Knots Landing, Star Trek: The Next Generation, Santa Barbara and Beverly Hills 90210.

In 1986, Michelle Phillips published a book California Dreamin': The True Story of the Mamas and the Papas.

Michelle Phillips had a short, tumultuous marriage with fellow Mamas and Papas band member John Phillips and they had one child. They divorced in 1970 and Phillips went on to have relationships with actors Jack Nicholson and Warren Beatty. She was briefly married to actor Dennis Hopper. Their 1970 marriage lasted eight days. Along with her daughter Chynna, Phillips has two other children Austin Hines and Aaron Wilson as well as a stepdaughter MacKenzie Phillips.